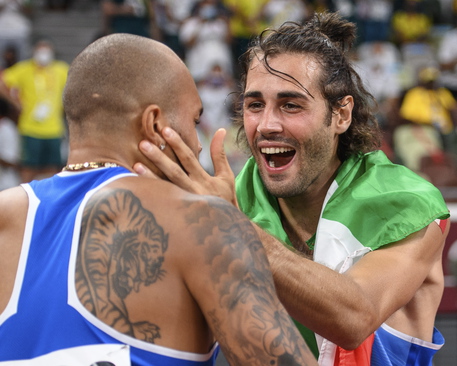 (ANSA) - ROME, AUG 2 - Italy is still savouring its golden Sunday at the Tokyo 2020 Olympics, with Marcell Jacobs winning the 100 metres final to take over from Usain Bolt as the world's fastest man just minutes after Gianmarco Tamberi took a share of gold in the high jump along with Qatar's Mutaz Barshim.
Premier Mario Draghi contacted the athletes and told them that "Italy is proud of you".
President Sergio Mattarella expressed "great appreciation and satisfaction".
Giovanni Malagò, the president of the Italian Olympics Committee (CONI), hailed it as "Italian sport's most beautiful day".
"They have made history," he added.
"Our grandchildren's grandchildren will talk about it".
Jacobs said that "It was my dream since I was a child" after triumphing with a time of 9.80 seconds and becoming the first Italian to make the final, never mind win the event.
A convert to sprinting from the long jump, he was clearly moved as he sang the Italian national anthem during the medal ceremony on Monday.
"I'm starting to realise now what happened," Jacobs told RAI television after getting his medal.
"I didn't even try to sleep last night. It was impossible.
"But I didn't think it would be so good to be on the highest step of the Olympic podium.
"I am the most emotional person in the world," he said, adding that he will keep his promise to marry his parter Nicole, with whom he has two small children.
Jacobs, 26, was born in El Paso, Texas, to an American father and an Italian mother.
He grew up in Italy though after coming to live in Italy when he was a small child after his parents split up.
"Marcell did not have an easy life," said Jacob's mother Viviana.
"On the contrary, he has had a life of great sacrifice".
Tamberi remained on cloud nine after clinching high-jump glory with a leap of 2.37m.
"The moment with the anthem and the Italian flag was thrilling," the 29-year-old, who missed out on Rio 2016 due to a career-threatening ankle injury, told RAI.
"I chased this so hard.
"The last five years have been tough because I never made do with small achievements.
"I wanted a day like yesterday to be the happiest person in the world.
"That was yesterday, it is today and it will be forever because it remains forever".