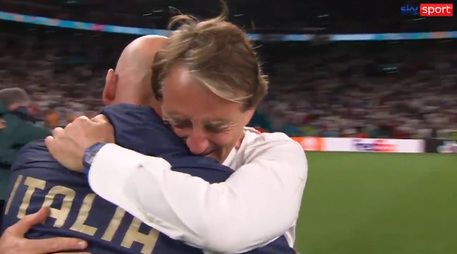 (ANSA) - ROME, JUL 12 - Italy coach Roberto Mancini hailed his friendship with Gianluca Vialli and said his side's victory over England in the final of Euro 2020 had "closed a circle".
Scenes of hugs at key moments between Vialli and Mancini, who have been friends since they were strike partners in the Sampdoria team that won the Serie A title in 1991 and reached the final of the European Cup the following year, have melted hearts during the Euros campaign.
Vialli joined the national team staff after overcoming a recent battle against cancer.
"I have a friendship with him that goes beyond everything and stems from the Sampdoria days," said Mancini, who has tuned the Azzurri around after taking over following their failure to qualify for the 2018 World Cup.
"Luck wasn't on Sampdoria's side that day (in the 1992 final against Barcelona), but a circle has been completed this evening.
"It was impossible to contemplate winning the Euros, but the lads were extraordinary.
"I don't have the right words, this is a magnificent group.
"This was a very difficult match, given how it started, but we dominated after we equalised.
"It's unfortunate for England.
"The team have come on leaps and bounds, and we're happy for all Italians". (ANSA).