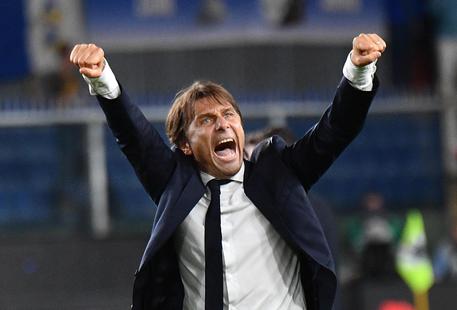 (ANSA) - ROME, MAY 3 - Coach Antonio Conte has said leading Inter Milan to this season's Serie A title is one of the biggest feats of his career.
Inter clinched their 19th scudetto and ended Juventus's run of nine consecutive championship titles when second-placed Atalanta drew 1-1 with Sassuolo on Sunday, meaning the 13-point lead they have after beating Crotone 2-0 is unassailable with four games to go.
It is Conte's fifth league title as a coach after he led Juve to the first three championships of the nine-season-long streak and one a Premier League during his time at Chelsea.
"This triumph is one of the biggest achievements in my career," Conte said.
"It wasn't an easy choice for me to come to Inter, at a time when the team wasn't used to winning.
"They were also a team that is the direct rival of Juventus, my former club." (ANSA).