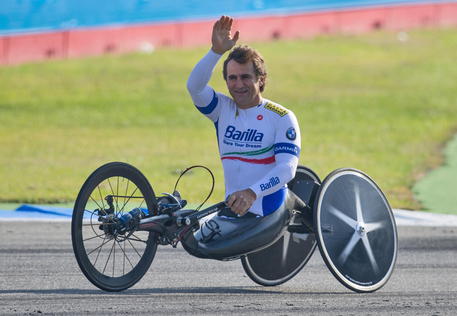 (ANSA) - ROME, SEP 24 - Milan's San Raffaele hospital said Thursday that there has been "significant progress" in the condition of Paralympic champ and former Formula One driver Alex Zanardi after a crash on June 19 on his handbike near Siena But the hospital also stressed that the overall clinical picture was "complex" and it was not possible to give a prognosis.
The 53-year-old, who has been at the San Raffaele since July 24, has undergone a series of operations on serious head injuries.
"Zanardi is going through sub-intensive care," said a statement.
"He has started another surgical path aimed at reconstructing the facial cranium and he has been undergoing cognitive and motor rehabilitation for several days".
Zanardi lost control of his handbike in wet conditions during a training run and crashed into a lorry.
The popular four-time Paralympic champ lost his legs in a CART crash in 2001.
Zanardi raced in F1 from 1991 to 1994 and again in 1999, placing sixth in the 1993 Brazilian GP.
He returned to racing less than two years after the CART accident, competing in the European Touring Car Championship in 2003-2004 and then in the World Touring Car Championship between 2005 and 2009, scoring four wins.
In addition to continuing to race cars, Zanardi took up competition in handcycling, a form of paralympic cycling, with the stated goal of representing Italy at the 2012 Summer Paralympics.
In September 2011, Zanardi won his first senior international handcycling medal, the silver medal in the H4 category time trial at the UCI World Road Para-Cycling Championships.
In September 2012 he won gold medals at the London Paralympics in the individual H4 time trial and the individual H4 road race, followed by a silver medal in the mixed H1-4 team relay.
In September 2016 he won an individual gold medal in the road time trial (H5) as well as the mixed team relay (H2-5) at the 2016 Paralympics in Rio de Janeiro. (ANSA).