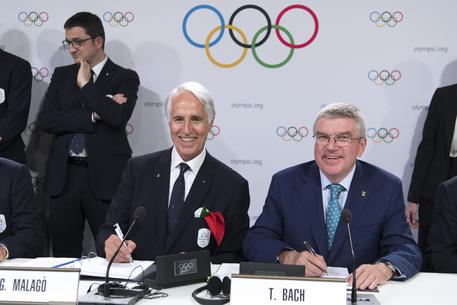 (ANSA) - Rome, August 6 - The International Olympic Committee (IOC) has sent a letter to Giovanni Malagò, the head of Italian Olympic Committee CONI, expressing "serious concern" about some measures in a bill in parliament to reform Italian sport. The letter, which ANSA has seen, says in six points that the draft legislation would "clearly impair the autonomy of CONI".
The IOC also says that it can adopt measures to protect the autonomy of a national movement, by "suspending or withdrawing the recognition of the Olympic committee". "Sporting organizations that belong to the Olympic movement have the right and obligation to be autonomous, including the free determination and control of the rules of sport, the definition of the structure and governance," the letter reads. "The Olympic committees can cooperate with governments, although these must not take actions that are contrary to the Olympic charter". The government's bill reforming Italy sport will not be put on hold after the IOC's letter, the League's Senate whip Massimiliano Romeo said. He said the bill will continue to move forward "despite various letters and little letters". Romeo added that the bill will not be put to confidence votes and that "all the amendments" presented to it will be voted on.
Sources within the ruling coalition, meanwhile, said "all of the IOC's interest in a single part of the bill that regards CONI's political power is surprising.
"The letter... may have been written hastily as many of the responses are in the reform itself," the sources added.