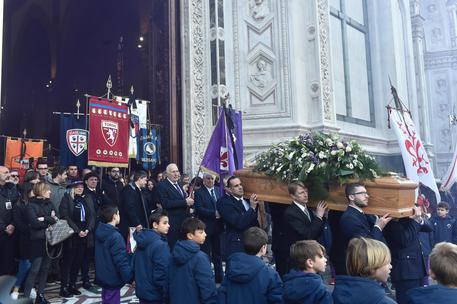 (ANSA) - Florence, March 8 - The funeral of Fiorentina captain Davide Astori took place in Florence on Thursday.
Astori, 31, died of a heart attack ahead of Fiorentina's match at Udinese on Sunday.
About a thousand people gathered at Fiorentina's stadium to see Astori's funeral cortege wind around the ground before heading off to the funeral in the basilica of Santa Croce, where some 10,000 people had crammed the basilica and square outside it.
Sports Minister Luca Lotti, Italian Olympic Committee (CONI) chief Giovanni Malagò, Italian Soccer Federation (FIGC) Commissioner Roberto Fabbricini and ex-premier Matteo Renzi, a former Florence mayor, were among those waiting in the church along with delegations from Serie A clubs.
As the hearse stopped in front of the Franchi Stadium, there was a long and loud round of applause and many tears from the fans present.
The father of Astori's partner Francesca Fioretti had a bad turn in Santa Croce and had to be stretchered out to an ambulance.
He was later said to have recovered.
Florence Archbishop Giuseppe Betori said Astori's life, "cut short by a mysterious illness", "calls all of us to take care of the lives of others, above all the weakest and the poorest among us".
"We have discovered with admiration the work the captain did for the children of the Meyer Children's Hospital in Florence, and for children in far-off countries".
"But the testimony of his younger teammates were no less significant, who felt welcomed, supported and guided by him", Betori said in his homily. Astori's teammate Milan Badelj read a long farewell letter on behalf of the team. "Thank you Davide, you our are light, you are the pure football of children, the son and brother we would all like to have," the letter said.
"You didn't know foreign languages but you communicated with everyone because you spoke from the heart - and that is a gift of a few elect." During the funeral ceremony, the choir of Florence's famed Maggio Musicale sang. As the coffin left the church, the fans sang "there's only one captain, there's only one captain".
Astori's brother Marco said in tears: "all these people have shown how much they loved him".
Renzi said "Ciao captain, all of Florence embraces you".
Fabbricini, the FIGC commissioner appointed after Italian soccer failed to agree on a new president after Carlo Tavecchio quit following Italy's failure to qualify for the World Cup for the first time since 1958, said: "We'll try to do all we can to remember him".
He said this would take place "gradually, because we don't want to impinge on the family's grief, because it's a very particular time.
"We're suffering, just think of how they must be feeling".
Fabbricini said "Astori's humility and simplicity must make us all think.
"Football is the most beautiful game in the world and sadly we don't always think that. Certain things are really useful for all".
Malagò, the CONI chief, said "we must take forward his values in all the world of sport".
CONI controls all sport in Italy.