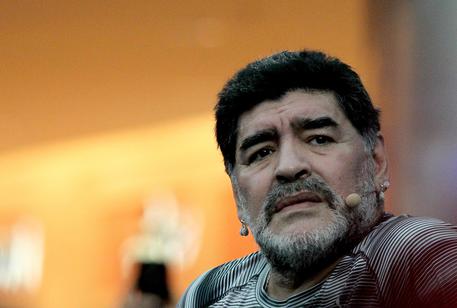 (ANSA) - Naples, June 27 - Argentina and Napoli legend Diego Armando Maradona will receive the honorary citizenship of Naples on July 5 in the southern city's iconic Piazza del Plebiscito in a ceremony starting at 21:30, Naples Sports Councillor Ciro Borriello told ANSA Tuesday. The ceremony will be preceded by a musical show in the square. Naples city council recently voted to give Mardona the keys of the city because of the "commitment and love" he showed the soccer-mad port city when leading its club to two Serie A titles in 1987 and 1990.
"It will be a popular party for Diego" said Naples Mayor Luigi de Magistris.
The first citizen said the honour was being conferred on the Pibe de Oro for "what he represented and still represents for the city".
De Magistris voiced the hope that "the fans will take part in the spirit of the event".
The Argentina, who vies with Pelé in polls of the world's best-ever soccer player, is revered in Naples after leading the local side to the two Serie A titles and a UEFA Cup during his memorable stint with them between 1984 and 1991.
Maradona was at his prime during his time with Napoli and in this period he also inspired Argentina to win the 1986 World Cup, scoring the famous 'Hand of God' goal and the most highly voted 'best goal ever' against England along the way.
Naples is dotted with murals of its most famous adopted son.