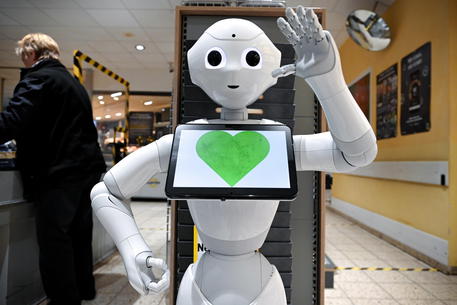 (ANSA) - ROME, APR 21 - Italy has produced the first robot in the world that thinks out loud and so learns new things like children, arousing empathy in humans.
The robot has been created by two Palermo University experts, Arianna Pipitone and Antonio Chella.
Pipitone is an expert in computational models for language and Chella an expert in informatics and robotics.
Their research, published in the iScience journal, is an important step towards a more effective communication between humans and machines.
"We'd like to show that robots are machines able to think," Chella told ANSA.
"The idea that a robot can have a sort of thought is stunning, and this can aid interaction, creating the right level of trust".
Pipitone said "it's an approach that makes the robot different from typical machines".
The pair used the Pepper robot for their experiment, a small humanoid with big eyes use din dozens of labs the world over.
But the software enabling him to think aloud is unique. (ANSA).