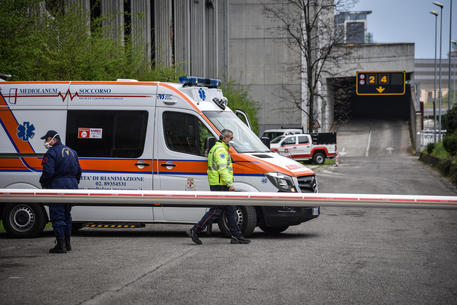 (ANSA) - Milan, May 28 - An 18-year-old Italian boy had a successful lung transplant 10 days ago after both of them were 'burned' by COVID-19, leaving him in a life-threatening condition, medical sources said Thursday.
It is the first operation of its kind in Europe.
The organs were rendered incapable of breathing in a few days, medical sources said.
The operation was carried out at Milan's Policlinico Hospital, under the coordination of the National Transplant Centre, with the regional transplant centre and the northern Italy transplant program. The boy, who was named as Francesco, started suffering a fever on March 2 and on March 6 was taken into intensive care at Milan's San Raffaele Hospital.
Two days later he was intubated and on March 23 was hooked up to a heart-lung ECMO machine.
But his lungs were now irreparably compromised, and in mid-April the San Raffaele doctors, having conferred with ones at the Policlinico, decided to give him new lungs.
Such an operation had only been tried before in some rare cases in China, while another one was carried out in Vienna a few days after the Milan one, which took place on May 18.
The boy was put on an urgent waiting list on April 30 and less than two weeks ago suitable organs were found, donated by a person who died in another region, and who was negative for the coronavirus.
"The lungs appeared wooden, extremely heavy and in some areas completely destroyed," said Statale University chest surgery specialist school head Mario Nosotti.
He said the operation had been "very complex" and it would now take some time for the boy to recover.
"He will now have to follow a long rehabilitation after those 58 days spent in bed, intubated and assisted by the machines," Nosotti said.