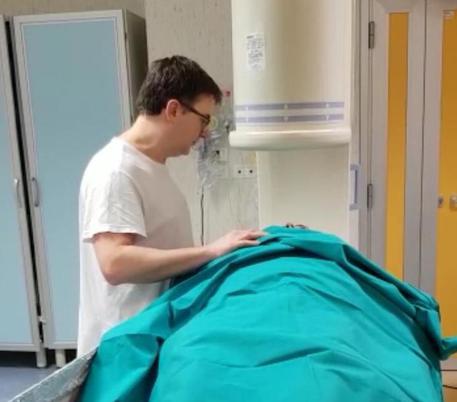 (ANSA) - Savona, January 9 - Hypnosis has been used to operate on atrial fibrillation, a heart condition, for the first time in Italy.
Hypnosis was used for analgesic or painkilling purposes, doctors said.
Doctor Luca Bacino used it in the electrophysiological room of the San Paolo Hospital in the northwestern city of Savona.
Bacino has introduced hypnosis into clinical practice thanks to collaboration with the centre for arrhythmology of the Cardinal Massaia Hospital in Asti, north of Turin.
Bacino did so after frequenting the Italian school of hypnosis, CIICS, in Turin.
Thursday's operation was an ablation of atrial fibrillation.
It regularly takes over three hours and local and systemic drug polytherapy is usually required for analgesic and anaesthetic purposes to be able to carry out the op.
Bacino said "thanks to hypnosis during the intervention it is possible to drastically reduce the use of anaesthetic and analgesic drugs and make the procedure even more tolerated".
He said "clinical hypnosis is still not very well known today and not very much applied in the medical field and particularly during cardiac procedures with an analgesic purpose, but its potential is extraordinary, in that you can reduce to a minimum the use of conventional drugs and furthermore the procedure is made much more tolerable.
"Hypnosis in electrophysiology is without doubt a novelty at an international level and its ever more extensive use will be able to drastically improve the daily work of the intervening cardiologist.
Atrial fibrillation ablation is a procedure used to treat an irregular heart rhythm (arrhythmia) that starts in the heart's upper chambers (atria). It's a type of cardiac ablation, which works by scarring or destroying tissue in your heart to disrupt faulty electrical signals causing the arrhythmia.
Atrial fibrillation ablation may be used if medications or other interventions to control an irregular heart rhythm don't work. Rarely, it's the first choice of treatment for atrial fibrillation.
Treatment for atrial fibrillation usually improves your symptoms, such as fatigue and shortness of breath. Without treatment, atrial fibrillation tends to get worse over time.