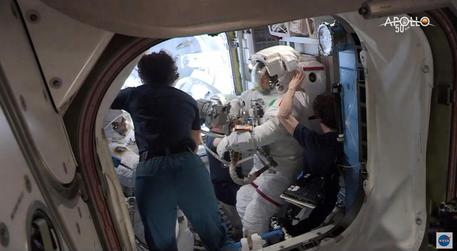 (ANSA) - Rome, November 28 - Italy has doubled its funding for the European Space Agency (ESA), cabinet secretary with the space brief Riccardo Fraccaro said Thursday.
"The space sector is the engine for development, innovation and competitiveness of the country-system," he said.
"Buoyed by the results achieved in terms of economic return on investments and greater efficiency of the institutions, Italy is doubling the funds earmarked for ESA's programmes.
"With a total subscription of 2.288 billion euros, the highest ever, our Country affirms itself as a global space power." Fraccaro added that Italy was stronger within ESA having reached 16% of the total budget.
"ESA's ministerial council meeting (in Seville) has been a success for Italy," he said.
"Our role within the ambit of European space (programmes), with a subscription of the total budget that has risen to 16%, takes on an unprecedented significance.
"Italy has become stronger in ESA and the programmes of the Agency are focusing on our areas of excellence".
Italy's Luca Parmitano this year became the first European astronaut to lead the International Space Station (ISS).
He recently carried out the first European space walk, considered the most difficult one since the repair of the Hubble telescope.
The spacewalk, carried out with NASA colleague, was carried out to repair the service the cosmic-particle-hunting Alpha Magnetic Spectrometer (AMS-02).
Italy emerges from the biggest meeting on European space programmes with its role as leader in space transport confirmed, with future projects including the Vega launcher and the Spacerider shuttle, Italian Space Agency (ASI) President Giorgio Saccoccia told ANSA.
"It's an exceptional result, I'm very satisfied," he said.