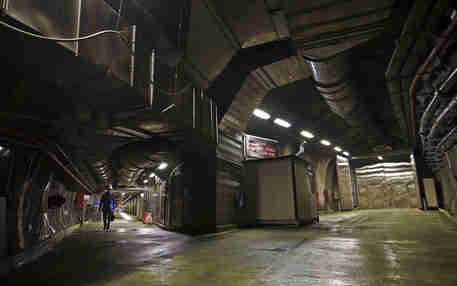 (ANSA) - Rome, February 1 - The Sox experiment planned at the national nuclear physics lab at the Gran Sasso was called off Thursday because of the lack of a Russian component, sources said. The National Institute for Nuclear Physics (INFN) and the French commission for atomic energy (CEA) decided to scrub the trial because the detector would not have been able to 'see' sterile neutrinos, whose discovery could lead to a new era in physics.
In a statement, the INFN said it had been "impossible to create the technical characteristics necessary for the experiment".
The project, which was to have lasted two years, aimed at the complete confirmation or at a clear disproof of the so called neutrino anomalies, a set of circumstantial evidences of electron neutrino disappearance observed at LSND, MiniBoone, with nuclear reactors and with solar neutrino Gallium detectors.
If successful, SOX would have demonstrated the existence of sterile neutrino components and opened a brand new era in fundamental particle physics and cosmology. A solid signal would mean the discovery of the first particles beyond the Standard Electroweak Model and would have profound implications in our understanding of the Universe and of fundamental particle physics. A negative result would mean closing a long standing debate about the reality of the neutrino anomalies, would probe the existence of new physics in low energy neutrino interactions, would provide a measurement of the neutrino magnetic moment, and would yield a superb energy calibration for the key machine, Borexino, which will be very beneficial for future high-precision solar neutrino measurements.