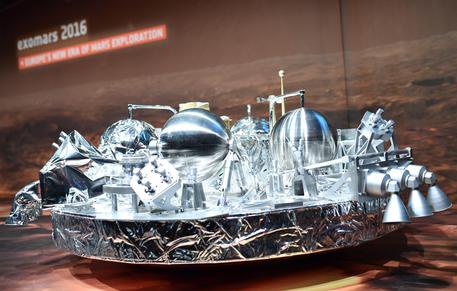 (ANSA) - Rome, October 21 - The ExoMars mission's Schiaparelli lander probably crashed onto Mars at a speed of 300 km/h from a height of 2-4 km and may have exploded on impact, the European Space Agency (ESA) said Friday after viewing pictures of the impact site taken by NASA's Mars Reconnaissance Orbiter probe. Schiaparelli, carrying a lot of Italian-made technology, crashed early Thursday after retro-rockets fired for only three seconds instead of the planned 30 because of an onboard computer glitch.
The relatively broad size of the impact mark could be due to the amount of surface material raised, but ESA said it could not rule out the lander exploding, especially since its fuel tanks were still full.
But ESA cautioned that these were still "preliminary interpretations which will have to be confirmed by further analysis".