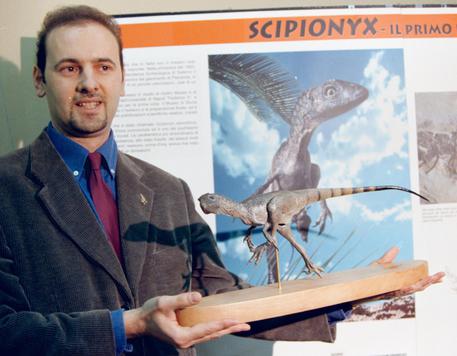 (ANSA) - Milan, April 19 - The remains of a Titanosaurus discovered in the Prenestine Hills near Rome went on public display for the first time at Milan's Natural History Museum on Tuesday.
Nicknamed Tito, the long-necked herbivore measuring about six meters in length and weighing some 600 kilos is thought to have reached Italy from Africa around 112 million years ago.
Paleontologists who found one of Titus' vertebrae and two pelvic fragments said they are "unique in the world".
"We might even be faced with a new species," said paleontologist Cristiano Dal Sasso - the discoverer of Ciro, Italy's first dinosaur.
Titanosaurus (meaning titanic lizard) belongs to the sauropod dinosaur family and was first described by paleontologists in 1877. They are estimated to have grown up to 12 metres long and about 13 tons in weight.
Tito was smaller, but scientists said this could have been because he was not yet fully grown when he died.