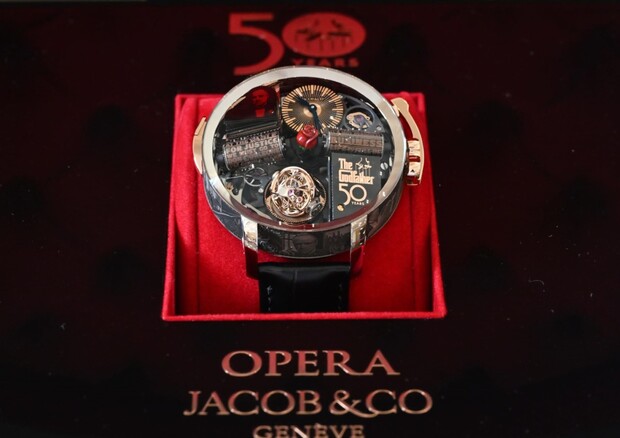 A $500,000 collector's item watch has been created by Jacob & Co to mark the 50th anniversary of the release of The Godfather.The timepiece, which was presented at Taormina's Hotel Timeo, is precious both in terms of the quality of the materials used and the sophisticated incisions that can be seen on its face. "Only 50 pieces will be available to enthusiasts," said Jacob & Co CEO Ben Arabov."The watch comes with a matching pen."The case is made of gold, titanium, steel and brass".The idea stemmed from the appreciation of Francis Ford Coppola's cinematic masterpiece by the family that produces the watch.There are plenty of special features for those wanting to buy the timepiece, such as a 'music box' playing the film's soundtrack and the inscription of the movie's most famous lines.Gianni Russo, the actor who played Carlo Rizzi in the film, and the journalist Nick Fiulkes took part in the event moderated by Wei Koh, along with Jacob Arabov, the founder of the company who has been involved in the watch's production.After the presentation the Jacob & Co party visited the Bar Vitelli in Savoca and the Castello degli Schiavi (Slaves' Castle) at Fiumefreddo, in the province of Messina, where unforgettable scenes were shot of the film that has celebrated its 50th birthday.

In collaboration with:
Luxury

Arabov in Sicily to present watch for film's 50th anniversary