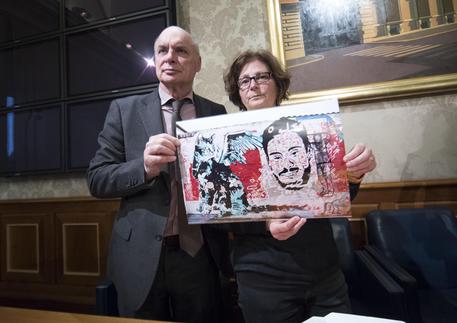 (ANSA) - ROME, JAN 24 - Italy is unwavering in its bid to find the four Egyptian intelligence officers who allegedly tortured Italian student Giulio Regeni to death, Foreign Minister Antonio Tajani told ANSA Tuesday after he was accused of raising false hopes by saying Egyptian President Abdel Fattah el-Sisi was now more willing to cooperate on the February 2016 murder of the Friuli-born Cambridge University doctoral researcher after talks in Cairo on Sunday.
On the Regeni case, Tajani told ANSA on the sidelines of the Balkans Conference in Trieste, there is and will be "no hesitation" on the part of Italian authorities.
"We continue to work to reach the truth, so that the perpetrators of the murder are convicted.
"We will continue to insist with Egypt so that full light can be shed and the perpetrators can be prosecuted.
"But we need to talk with Egypt on other issues because we have a duty to ensure the stability of North Africa and Libya," he stressed.
Optimism that Egypt may start helping Italy to find Regeni's murderers does not mean that everything in bilateral relations is OK, Tajani said Monday after being accused of spurring false hopes by saying his talks with Sisi had been positive on the student tortured to death in Cairo in January-February 2016.
Tajani said after meeting Sisi in the Egyptian capital Sunday that he had been "reassured on the case of Regeni, for whose murder Rome prosecutors are seeking four Egyptian intelligence officers.
Regeni's parents dismissed this optimism in an interview with Rome daily la Repubblica Monday saying that Cairo's collaboration in notifying the officers of their indictment, and thus allowing a trial in absentia to proceed, had been and continued to be "non-existent".
The four officers are National Security General Tariq Sabir and his subordinates, Colonels Athar Kamel Mohamed Ibrahim and Uhsam Helmi, and Major Magdi Ibrahim Abdelal Sharif.
The Italian justice ministry said last month that it has had no response from Egypt over its calls for cooperation in the case of the four Egyptian intelligence officers suspected of Regeni's abduction, torture and murder.
The trial against the four has been suspended after a Rome court ruled that it could not go ahead because the defendants had not been notified of its existence.
Italy has been trying to notify the four officers of their indictments in order to proceed with their trial in absentia but the efforts ran into a brick wall last year after Cairo refused to help locate them.
Regeni, 28, was tortured to death while in Egypt to work on research into Cairo street hawkers' unions.
His mother only recognised his body by the tip of his nose.
A fresh hearing in the case has been set for February 13 in Rome.
Tajani said Monday that Sisi had shown a new willingness to collaborate on the case.
In Egypt "we raised the issue of Regeni because we need to know and to hit those who murdered this boy. I put the problem to the President of the Egyptian Republic and to the Foreign Minister, and the President was the first to raise the issue by saying that he will do everything to remove the obstacles that have made relations between Italy and his country difficult. I want to be optimistic, but that does not mean that everything is OK.
We will continue to monitor but it seems to me that I have seen a new and different willingness compared to the past", Tajani said on Radio 24.
Italian officials including Premier Giorgia Meloni have previously got assurances from Sisi that Cairo would help locate the four, but no moves in that direction have been made.
Meanwhile Regeni's parents and many politicians, especially on the left, have protested a new gas deal with Egypt to help Italy cut its reliance on Russian gas amid the Ukraine war.
Rome has described the stance of Egyptian authorities as one of "total closure" .Regeni, whose research topic was a politically sensitive issue, was tortured for days, resulting in "acute physical suffering" by being subjected to kicks, punches, beaten with sticks and bats and cut with sharp objects, and also being burned with red-hot objects and slammed into walls, Rome prosecutors say.
His neck was then snapped in a fatal blow.
At various times Egypt has advanced differing explanations for Regeni's death including a car accident, a gay lovers' tiff and abduction and murder by an alleged kidnapping gang that was wiped out after Regeni's documents were planted in their lair.
Lack of cooperation on the case by Egypt led to Rome's temporarily withdrawing its ambassador from Cairo for a spell.
The Regenis have appealed to the EU for help in finding the truth about their son's slaying and have condemned continued Italian arms sales to Egypt including two frigates, as well as last April's new gas deal. (ANSA).