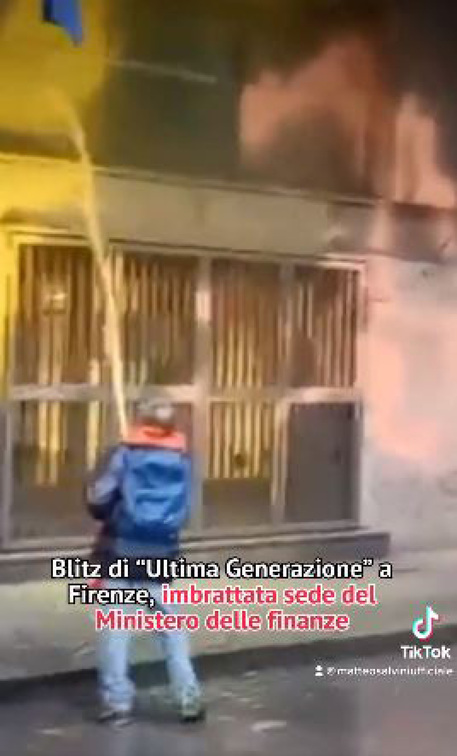 (ANSA) - ROME, JAN 23 - Members of Italy's Ultima Generazione (UG) group on Sunday continued their campaign of civil disobedience to highlight the need to tackle the climate crisis by spraying paint over the front of a branch of the economy ministry in Florence.
Three 'concerned citizens' used fire extinguishers to squirt easy-to-wash-off paint over the building, sat down in front of it with a banner saying "Stop Fossil-Fuel Subsidies" and waited for the police to arrive. UG said the act sought to "denounce the complicity of the political decision-makers and fossil-fuel multinationals, which enjoy direct and indirect subsidies for extraction activities".
"The effects of the climate collapse are already evident," UG supporter Nicole said in a statement.
"Last year we witnessed extremely serious climate episodes. I am afraid. I have no idea what could happen....
"Ours is a cry for help, we want the politicians to listen to us.
"It is necessary to take action because there is no more time and these gestures are the only way we have left to get heard".
UG have staged many similar protests including splashing paint over the front of the Senate in Rome, the La Scala opera house in Milan and sticking themselves to Botticelli's Spring at the Uffizi and the Laocoon statue in the Vatican, as well as blocking the Mt Blanc Tunnel, throwing flour over an Andy Warhol car in Milan, and throwing soup onto a Van Gogh in Rome.
They have also blocked traffic on Rome's ring road on several occasions.
Ultima Generazione is demanding the immediate halt to the reopening of decommissioned coal plants and the scrapping of new gas-drilling projects in Italy.
It also wants the government to take action to increase the energy generated by renewables in Italy by at least 20GW each year. (ANSA).