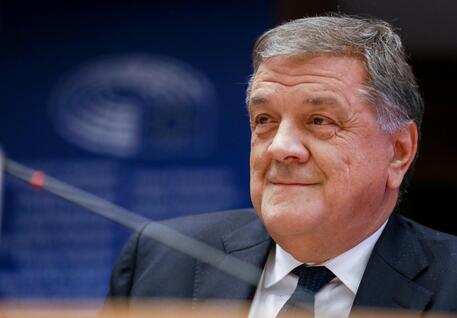 (ANSA) - ROME, JAN 20 - The corruption probe attracts ongoing attention to the EU Parliament, which is trying to restore public trust with a series of reforms. At the same time, criminal investigations continue.
'CRIMINAL ORGANIZATION'.
In December 2022, the then-vice-president of the EU Parliament, Eva Kaili, as well as former EU lawmaker Pier Antonio Panzeri and two other suspects were arrested by the Belgian authorities on suspicion of participation in a criminal organization, money laundering and corruption. According to the Belgian prosecutor's office, the suspects are accused of having influenced decisions in the European Parliament in favor of football World Cup host Qatar in return for money and gifts. As things are still unfolding, the EU Parliament is looking into reforms to guarantee the transparency and accountability of its members.
REFORMS FOR MORE TRANSPARENCY.
This week, EU Parliament President Roberta Metsola presented a first set of anti-corruption reforms in Strasbourg. Metsola promised to ensure "more transparency" and "accountability" with a "first-step approach" that would include greater scrutiny of "those representing third countries and their interests." The Christian Democrat politician plans to introduce a so-called "cooling-off period", during which former EU legislators may not register to lobby after the termination of their mandate. Among other things, measures will also include improved accountability and checks of lobbyists as well as better controls of access to the parliament's premises.
Parliament sources previously said that some proposals of the reforms could be implemented within the next few weeks if there was political support.
The Green Party already announced that the proposals do not go far enough and demanded, for example, the publication of penalties for parliamentarians who do not comply with guidelines and rules. The conservative ECR group said it was absolutely clear that the parliament could not continue in this way and welcomed the proposals. The Social Democrats, who were particularly affected by the scandal, also agreed in principle.
FURTHER CONSEQUENCES.
In this week's plenary session, the EU Parliament has voted for Marc Angel to become one of its 14 vice-presidents. The socialist lawmaker from Luxembourg replaces Eva Kaili, who was stripped of her office after the suspicions emerged. Angel obtained 307 votes, exceeding the 296 votes required for an absolute majority, from fellow legislators in the second round of voting at the European Parliament in Strasbourg, France, on Wednesday.
In the aftermath of the corruption allegations, all work involving Qatar has been suspended in the European Parliament.
This includes all action on legislative files related to Qatar, including visa liberalization and the EU-Qatar aviation agreement, as well as any planned visits.
However, the scandal is still unfolding. The immunity of two further members of the European Parliament, who are under investigation in a corruption scandal linked to Qatar, is to be suspended.
Belgian authorities requested the waiving of immunity for two Socialist and Democrats lawmakers, Belgian Marc Tarabella and Italian Andrea Cozzolino, Metsola said on January 16. The request was now being dealt with by the parliament's legal committee, she added. The parliamentary president previously said that she expected the final decision to be taken at the next plenary session on February 13.
CRIMINAL INVESTIGATIONS.
In the meantime Pier Antonio Panzeri, a former EU lawmaker entangled in the corruption investigation in the European Parliament, has signed a cooperation agreement, Belgium's state prosecutor said in a statement on January 17.
Panzeri is to make "substantial, revealing, truthful and complete statements" with regards to the corruption probe linked to Qatar, including his own involvement and that of other participants, the statement read.
The former EU lawmaker is to give details about the financial arrangements with other countries involved, the financial structures set up, and "the identity of the persons he admits to having bribed.
In return, Panzeri receives a limited sentence, including imprisonment, a fine and the confiscation of all assets acquired in relation to the alleged deed. According to his lawyer, Panzeri is to receive a five-year sentence, most of which will be suspended, as he told Belgian TV station RTL on January 18.
In the beginning of the week, an Italian court in Brescia approved a request by Belgian prosecutors to extradite Panzeri's daughter in relation to the so-called Qatargate scandal. The request for the extradition of Panzeri's wife had already been approved. The two cases will now be brought to the Italian Supreme Court of Cassation.
ITALIAN PRIME MINISTER MELONI: NO "ITALIAN JOB".
The corruption scandal has sent shockwaves through Europe. At the year-end press conference in December, Italian Prime Minister Giorgia Meloni stated: "One thing really annoys me: Many international colleagues define these events as an 'Italian Job', as if it was a stain on our nation," she said. "The affair does not only concern Italians, but also Belgians, Greeks and people from other nations. If anything, it is a party issue, a socialist job," the far-right politician added.
The Spanish president of the group of Socialists and Democrats in the European Parliament, Iratxe García, called for the full weight of the law to be brought down on those involved, because they had committed "crimes of which they were aware." She said that all MEPs in her political family were disappointed. In December, Pedro Sánchez, the Spanish Prime Minister and Social Democrat, described the corruption allegations as a case of "extraordinary gravity." He also said that complete trust had to be placed in the President of the European Parliament, Roberta Metsola, and the Belgian justice system.
This article was produced with contributions from AFP, ANSA, dpa and EFE as part of the European Newsroom (enr) project. (ANSA).