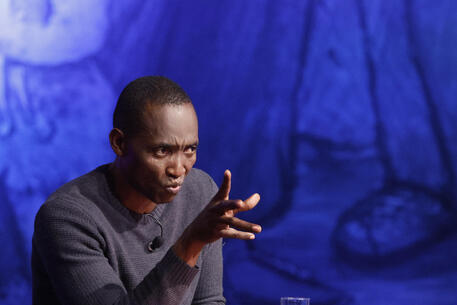 (ANSA) - ROME, NOV 29 - The mother in law of migrant worker trade unionist, anti-gangmastering activist and Italy's only black MP Aboubakar Soumahoro on Tuesday agreed to pay one of her workers two years of unpaid wages as part of a case that has seen her probed for fraud and embezzlement in running two migrant farm cooperatives south of Rome and severely embarrassed her son in law, prompting his self-suspension from his Green-Left party.
Marie Terese Mukamitsindo, who runs the Karibu and Consorzio Aid cooperatives, agreed in a legal deal to pay a woman who used to work for the first coop all owed wages and extras from 2021 to 2022.
Italian police are delving into Mukamitsindo's accounts in an investigation for embezzlement and aggravated fraud for suspected false invoicing in connection with the two farm cooperatives she runs at Latina south of Rome, judicial sources said Monday.
They said Tuesday they had almost finished winding up their investigations.
On Sunday cooperative workers said they had been "fooled" by 42-year-old Ivorian-born activist Soumahoro, who has suspended himself from his Green-Left party although he himself is not under investigation in the probe.
Soumahoro has also defended his wife, also not under investigation but believed to have had a role in the coops, after pictures of her wearing designer clothes and accessories came out.
He said that the woman, Liliane Murekatete, enjoyed "the right to fashion".
Soumahoro, a hero to many, became Italy's only current black MP after the September 25 general election where he was 'parachuted' into a safe Green-Left seat at Modena in Emilia-Romagna.
He turned up for the first parliamentary session in muddy wellies to highlight the continued plight of the labourers whose rights he has been defending against gangmasters and other exploitation for over a decade.
Police in Latina, a city founded by Mussolini after he reclaimed the Pomptine Marshes in the 1930s, are going through documents on funding and grants for the two cooperatives run by Mukamitsindo.
The are sifting them for evidence of unpaid wages and rents, judicial sources said.
The Italian Left and Green leaders said Sunday they were looking closely at the probe while stressing that Soumahoro was not at the moment directly implicated.
Left leader Nicola Fratoianni said the parties would "assume full political responsibility" while being "unaware of any offence" committed by their MP. (ANSA).