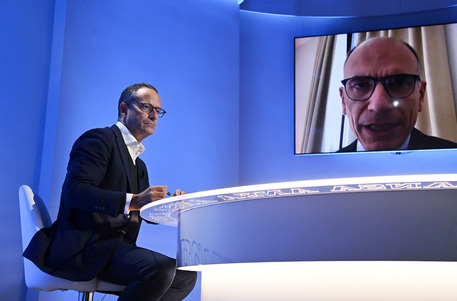 (ANSA) - ROME, SEP 22 - Democratic Party (PD) leader Enrico Letta said Thursday that Russian President Vladimir Putin wants Italy and the European Union to be divided and is cheering for the centre-right coalition to win Sunday's general election here.
"It's a dramatic time in the history of Europe and of our country," ex-premier Letta told an ANSA Forum.
"What I want is to call for an effort to unite the country, to be united and together at a time when we must not be divided.
"What Putin wants is a divided Italy and a divided Europe, an Italy that works to divide Europe.
"After the election there will be a result and another government, not (outgoing Premier Mario) Draghi.
"The vote must take account of the fact that there needs to be a government capable of taking clear positions and stopping the ambiguous stances that are not good for our country or for the capacity of Europe to be united.
"When I sense that Putin is particularly attentive to the result in Italy, that he would be happy for the right to win in our country, I feel worried".
The centre-left leader said there was no chance of the PD patching things up with the 5-Star Movement (M5S) after it triggered the crisis of government that caused the coalition supporting outgoing Premier Mario Draghi's government to collapse.
"The 5-Stars decided to run alone," Letta said.
"They brought down Draghi, so they are responsible for something serious.
"Our paths separated at that moment in an irreversible way.
"The M5S deliberately decided to go alone. They did so to regain the (political) virginity they lost in the four years in which they governed with anyone".
While the PD is a close second to Giorgio Meloni's Brothers of Italy (FdI) party in the polls, the centre-left coalition as a whole lags a long way behind the combined centre-right bloc.
But Letta has said the centre-left still has a chance of winning as a high percentage of voters are undecided.
On Thursday he appealed to 18-year-olds who will have the chance to vote for the first time.
"Go out and vote," he said.
"Don't let your destiny be decided by others.
"The destiny of our country depends on your vote". (ANSA).