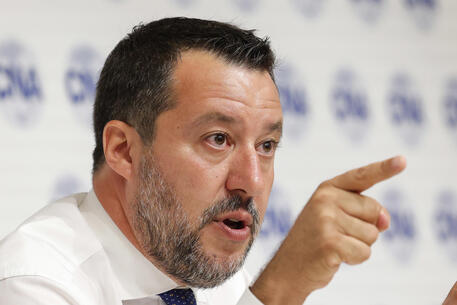 (ANSA) - ROME, SEP 14 - Brothers of Italy (FdI) leader Giorgia Meloni and League leader Matteo Salvini said Wednesday that they haver never accepted money from Moscow after a furore over a US intelligence report on Russian funding of foreign political parties hit the campaign for Italy's September 25 general election.
According to the report, Russia has given over $300 million to foreign parties, officials and politicians in more than 20 countries since 2014.
"All our forms of financing are verifiable," Meloni, who is favourite to be Italy's next premier with the FdI tipped to be the driving force of a landslide victory for the centre-right coalition, told Radio 24.
"I am certain that Brothers of Italy does not take foreign money".
Salvini said the same.
"I have never asked for, and never taken, money, be it roubles, euros, dinars or dollars, from Russia," Salvini told RTL 102.5.
"It is strange that these fake-news reports always arrive 10 days before a vote.
"Investigations have been open for years and nothing has ever been found because there is nothing to find".
Salvini has expressed admiration for Russian President Vladimir Putin several times in the past, but he has also condemned Moscow's invasion of Ukraine.
There was a row earlier in the year when it emerged that the Russian embassy paid his ticket for a planned peace mission to Moscow.
The trip was cancelled and the money paid back.
"Working for peace and trying to stop the war is something different," Salvini said.
"If someone has taken money they should say so.
"It seems to me that there are some people, above all on the left, who are using this story in order to not have to take to talk about energy bills, tax demands and jobs "Those who help the League do so in Italy in a transparent, spontaneous way".
Adolfo Urso, the president of the Italian parliament's Copasir intelligence oversight body, said on RAI television that Franco Gabrielli, the Cabinet secretary with the security brief, had told him there there was no news of Italy being involved in the US report at the moment.
Enrico Letta, the leader of the centre-left Democratic Party (PD, called for "clarity" and "transparency", saying Russia's attempts to "contaminate Western democracy" were disturbing.
He said the government should reveal anything it knows about Russian influence in politics before the general election.
He also alleged that the League has not cut off ties with the conservative United Russia party that backs Putin.
Foreign Minister Luigi Di Maio of the centrist IC party called for a parliamentary commission of inquiry into eventual Russian interference in politics.
Meloni said that she was suing daily newspaper La Repubblica and former US Ambassador to NATO Paul Volker over an interview in which he talked about alleged Russian support of some Italian parties. (ANSA).