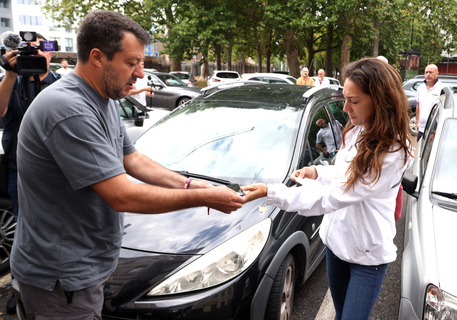 (ANSA) - ROME, AUG 19 - Over half of the rightwing League party's Senate candidates for the September 25 general election are women, leader Matteo Salvini announced Friday.
"We've wrapped up the League's candidates for the first past the post seats in the Senate, and 56% of them are women," he tweeted.
"Others promise and quarrel while the League does things," he said.
The League is in a right/centre-right coalition with the post-Fascist Brothers of Italy (FdI) party and three-time ex-premier and media mogul Silvio Berlusconi's centre-right Forza Italia (FI) party.
FdI is currently polling at over 24%, the League at 12.5%, and FI at 8%.
The alliance rule on the premiership candidate is that the leader who gets the most votes will bid for it.
At the moment FdI leader Giorgia Meloni looks set to become Italy's first post-Fascist and first woman premier. (ANSA).