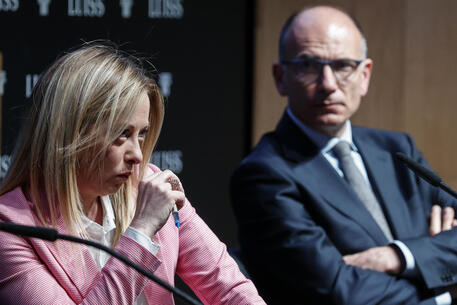 (ANSA) - ROME, AUG 19 - Conservative Brothers of Italy (FdI) leader Giorgia Meloni slammed centre-left Democratic Party (PD) leader Enrico Letta after the former premier told CNN the post-Fascist chief posed risks for Europe if she becomes prime minister after the September 25 general election.
"Patriots always defend Italy, while the Left goes around discrediting the nation to defend its own personal profit," Meloni said Friday.
She accused him of "using his interview with CNN (on Thursday) not speak well of his homeland but to launch alarms and lies about FdI saying that in the event of a centre-right victory there will be a catastrophe in Italy and Europe".
Letta retorted: "She accused me of discrediting Italy because I have exposed FdI's choices in the EU." Fdi is friends with Hungarian hard right Prime MInister Viktor Orban and French hard right National Rally leader Marine Le Pen, for both of whom Meloni has voiced admiration, while its allies in the European Parliament's conservative caucus include Spain's post-Franchist Voc party and Poland's national-conservative Law and Justice party which has infringed EU rule of law norms.
Letta went on to cite three FdI policy proposals that "are follies for those who look at us from abroad": the obligation for foreigners to pay a surety, an anti-migrant naval blockade outside Italy's maritime borders, and the renegotiation of the massive post-COVID National Recovery and Resilience Plan (NRRP).
In his interview with CNN, Letta said "we need a stronger Europe and for Italy to be at the centre of Europe, with France, Germany, Spain and the Benelux countries, and not with Poland and Hungary.
"What worries us are the choices" of Meloni, who is tipped to become Italy's first post-fascist and first woman premier after September 25.
Letta said the FdI had "voted in Europe against climate change directives, did not support the Recovery Plan that is so important for the country, and have always been against any European immigration policy and greater EU integration.
"In Europe their allies are Marine Le Pen and Orban, parties and leaders that want to have a weaker Europe.
"That's why we think that there is a great risk not only for Italy but also for Europe".
The PD and FdI are both polling at around 24% as first and second Italian parties but Meloni has been more successful at forging alliances than Letta and the right/centre right block of the FdI, former anti-migrant interior minister Matteo Salvini's national League, and three-time ex-premier and media mogul Silvio Berlusconi's centre-right Forza Italia (FI) party are projected to win a clear majority in both houses of parliament.
Meloni, who told recently Fox News in her first English-language interview that she would be proud to be premier, sent a video to the foreign press in English, French and Spanish last week saying there was no nostalgia for Fascism in her party and the FdI's position in the western camp was "crystal clear", sharing values with Britain's Conservatives, America's Republicans and Israel's Likud.
"I have read that a Brothers of Italy victory in the September elections would be a disaster heralding an authoritarian shift, Italy's exit from the euro and other nonsense of this ilk," she said.
"None of this is true. The Italian right has consigned Fascism to history for decades now, condemning without ambiguity the suppression of democracy and the ignominious laws against the Jews.
"For years I have had the honour of leading the European Conservative Party which shares values and experiences with Britain's Tories, America's Republicans and Israel's Likud.
"Our position in the western camp is transparent and crystal clear as we have shown once more by condemning without ifs or buts Russia's brutal aggression against Ukraine and helping from the opposition to strengthen Italy's position in European and international fora". (ANSA).