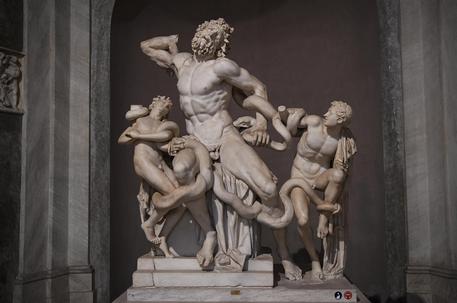 (ANSA) - ROME, AUG 19 - Activists from Italy's Ultima Generazione (Last Generation) climate crisis action group on Thursday glued themselves to one of the Vatican Museum's most famous statues holding up a placard saying "no gas and no coal".
The activists, who have used tactics similar to those of Extinction Rebellion and other groups in Britain and elsewhere, glued themselves to the base of the iconic Laocoon group of statuary.
The group, one of the most famous works of Greek and Roman antiquity, shows the Trojan priest and his two sons being killed by sea snakes sent by Poseidon after vainly trying to expose the Greek's Trojan Horse ruse.
Ultima Generazione said in a statement "Like Laocoon, scientists and activists are witnesses trying to warn those around them of the consequences that today's actions will have on the future.
"Like Laoccon, scientists and activists are not being listened to or, even worse, they are being silenced by the political world, which is more interested in defending the privileges of a minority than proving for the good of the community".
Laura, one of the two activists who glued themselves to the statue, said "the statue recalls the sad fate which the Greek (sic) priest suffered in the attempt to save himself, his children and all the citizens.
"In our movement there are parents, there are children, united by the will to push the world of politics to make the right choices to curb climate change before it is too late".
The statue of Laocoön and His Sons, also called the Laocoön Group, has been one of the most famous ancient sculptures ever since it was excavated in Rome in 1506 and placed on public display in the Vatican Museums, where it remains. It is very likely the same statue that was praised in the highest terms by the main Roman writer on art, Pliny the Elder.The figures are near life-size and the group is a little over 2 m (6 ft 7 in) in height, showing the Trojan priest Laocoön and his sons Antiphantes and Thymbraeus being attacked by sea serpents.
The group has been called "the prototypical icon of human agony" in Western art, and unlike the agony often depicted in Christian art showing the Passion of Jesus and martyrs, this suffering has no redemptive power or reward.
Pliny attributes the work, then in the palace of Emperor Titus, to three Greek sculptors from the island of Rhodes: Agesander, Athenodoros and Polydorus, but does not give a date or patron.
In style it is considered "one of the finest examples of the Hellenistic baroque" and certainly in the Greek tradition, but it is not known whether it is an original work or a copy of an earlier sculpture, probably in bronze, or made for a Greek or Roman commission.
Most scholars think it a copy of a much earlier Greek original.
(ANSA).