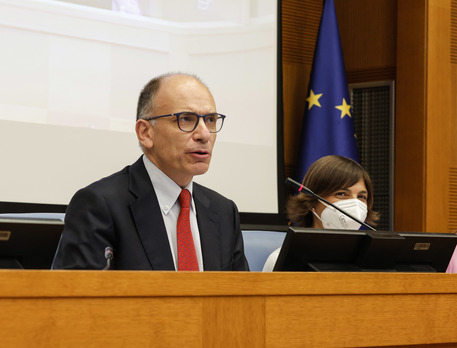 (see related political story) (ANSA) - ROME, JUL 26 - Democratic Party (PD) leader Enrico Letta on Tuesday framed Italy's upcoming election as a contest between the pro-EU stance of his centre-left group and the Euroscepticism of Giorgio Meloni's right-wing Brothers of Italy (FdI) party.
"This will be the most crucial Italian vote in the history of Europe," Letta told a PD meeting at the Lower House.
"The election will give a clear result and it will go in one direction or another.
"There won't be a draw.
"Either the Europe of the EU wins or that of nationalism does.
"The choice is between us and Meloni".
The right-wing FdL is currently top of the opinion polls with the support of around 23-25% of the electorate.
The PD is a close second, polling at around 22-23%.
But the right/centre-right as a coalition looks in a strong position for the September 25 election, especially with the PD ruling out running with ex-premier Giuseppe Conte's 5-Star Movement (M5S) after it triggered the crisis of government that led to collapse of outgoing Premier Dragh's government of national unity.
FdL's allies, the League and Forza Italia, are polling at around 12-13% and 7-8% respectively.
The support for the M5S, which won around a third of the vote at the 2018 general election, has shrunk to around 10%, according to the polls.
The centrist Azione group o former Industry Minister Carlo Calenda, is polling at around 5-6%, but the other centrist and left-wing groups that could potentially ally with the PD are polling well under 5%.
Letta, meanwhile, said the debate about who should be the premier of an eventual centre-left government was "surreal".
The PD leader and ex-premier, who headed a grand coalition government of centre-left and centre-right parties from April 2013 to February 2014, said he was willing to by the "front-runner" for the election campaign.
Calenda, who is putting together a 'republic' group that is expected to ally with the PD, wants Draghi to be the premier candidate.
But he said Tuesday that he would stand as premier candidate if Draghi were not willing to do do.- (ANSA).