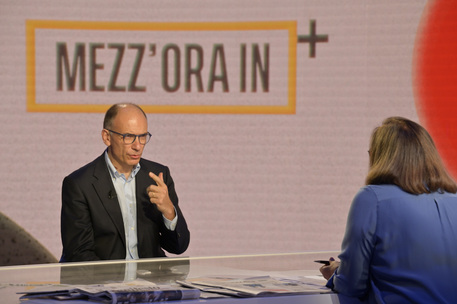 (ANSA) - ROME, JUL 25 - Democratic Party (PD) leader Enrico Letta has said the centre-left group's rift with the 5-Star Movement (M5S) is "irreversible" after the M5S triggered the crisis that led to the collapse of outgoing Premier Mario Draghi's government of national unity last week.
The PD had been expected to make a pact with the M5S to run together at the next general election until the M5S snubbed a recent confidence vote on a government decree.
That sparked a crisis which culminated with three parties, the M5S, Matteo Salvini's right-wing League and Silvio Berlusconi's Forza Italia (FI), last Wednesday failing to take part in another vote of confidence, which led to Draghi's resignation and the dissolution of parliament for snap elections on September 25.
"The rift with the 5-Stars for this election is irreversible," Letta told Rai television.
"We said so before.
"I'd told Conte that if he took that sort of decision, this would be the consequence.
"We are consistent with the decision".
In an interview in Sunday's edition of La Stampa, Conte called the PD "arrogant" and said the real progressive force of Italian politics was the M5S, not the centre-left party. (ANSA).