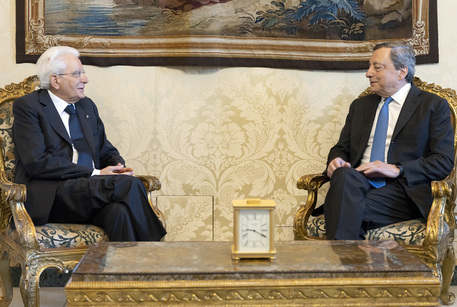 (ANSA) - ROME, JUL 21 - President Sergio Mattarella announced on Thursday that he had signed a decree to dissolve parliament for a general election to be held within 70 days.
The head of State said she he had made the decision because he saw no prospect of another ruling majority being formed following the resignation of outgoing Premier Mario Draghi.
Draghi quit after three of the big parties in his coalition, Matteo Salvini's right-wing League, ex-premier Silvio Berlusconi's Forza Italia (FI) and the 5-Star Movement (M5S), failed to take part in a confidence vote in the Senate on a resolution backing him on Wednesday.
September 25 is seen as a possible date for the vote.
There had been concerns that this could clash with a Jewish holiday but the nation's Jewish Community said Thursday that holding the election on this day would not be a problem for them.
The president's office has said that the outgoing government will stay in office for everyday administration for the time being.
Addressing the Lower House before meeting Mattarella to resign, the former president of the European Central Bank thanked the lawmakers present, most of whom had supported his government of national unity over the last year and a half.
He appeared relaxed and cheerful, after tense moments on Wednesday during his reply to criticism of his call for the parties to renew the "pact of trust" that his government was based on, when he had to deny having asked to be given "full powers".
"Sometimes even the hearts of central bankers get used," he quipped, referring to a recent joke he made about a transplant recipient preferring the heart of a central banker to that of another donor because it had 'never been used'.
"Thank you for all the work done in this period".
Draghi basically confirmed the resignation he presented last week when the M5S snubbed a confidence vote on a decree, sparking a crisis of government.
Mattarella initially reused to accept the resignation, telling Draghi to report to parliament, which he did on Wednesday.
Draghi made an appeal to patch up his coalition on Wednesday after an array of calls for him to stay on, given the difficulties Italy currently faces, from business leaders, mayors, health workers and other groups.
Among other things, Rome has more reforms to deliver to be able to get the next tranches of almost 200 billion euros in EU grants and low-interest loans for its post-COVID National Recovery and Resilience Plan (NRRP).
"We are not like the others, we decided to choose (what's best for) Italy," said Enrico Letta, the leader of the centre-left Democratic Party (PD).
"Parliament went against the country but we showed that we are focused on the interest of the country and the voters will rewards us".
On Wednesday M5S leader and ex-premier Giuseppe Conte defended his movement's role in the collapse of the government, saying Draghi had "shown us the door" by refusing to listen to their demands.
Civil Service Minister Renato Brunetta said Thursday that he was quitting FI after the centre-right group helped bring down the government.
His exit follows that of another high-profile, long-standing FI figure, Regional Affairs Minister Mariastella Gelmini, who quit on Wednesday, saying the party had turned its back on families and firms and given in to League leader Matteo Salvini.
"Those who put partisan interests ahead of the interests of the country at such a grave time are irresponsible," Brunetta said.
"The increasingly tight-knit leadership of Forza Italia have splayed themselves to the worst form of nationalist populism, sacrificing a champion like Draghi, the pride of Italy around the world, on the altar of the most short-sighted electoral opportunism".
Italy looks set to have early elections within months following the collapse of Draghi's government.
The right/centre-right coalition made up of Brothers of Italy (FdI), the only major party that did not back Draghi's government of national unity, the League and FI is expected to win the election. (ANSA).