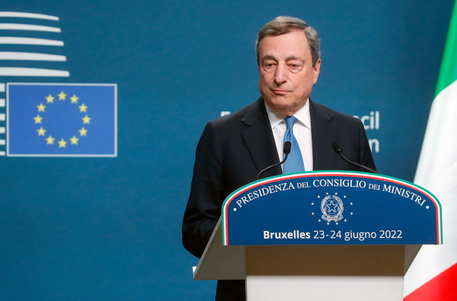 (ANSA) - ROME, JUN 24 - Premier Mario Draghi said Friday that he was not disappointed at the outcome of the EU summit in terms of efforts to keep a lid on gas prices, which have soared as a knock-on effect of Russia's invasion of Ukraine.
Draghi has been calling for the EU to impose a cap on gas prices and was reportedly pushing for an extraordinary European summit on this issue in July.
However, EU sources said Friday there were "no plans" for such a summit.
"I don't feel disappointed at this summit," Draghi told a press conference. "On the contrary, I didn't expect to have a precise date set for a complete report on the energy question.
"Things are moving, although perhaps not as rapidly as one would like".
He said an extraordinary summit could take place if Russia takes further action after causing the EU "immense difficulty" by reducing gas supplies to Europe.
"It is necessary to take action immediately on energy prices because inflation, which was dependant substantially on energy, now depends on other things too," he said.
"These increases are spreading and are becoming increases (in the prices of) other items". (ANSA).