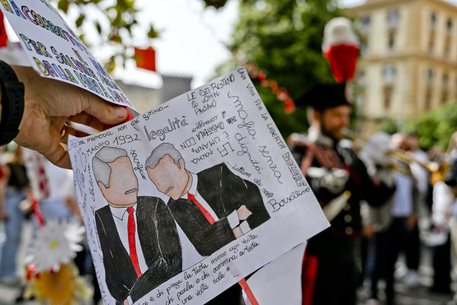 (ANSA) - ROME, MAY 23 - President Sergio Mattarella on Monday led Italy's commemorations for the 30th anniversary of the murder of anti-mafia prosecutor Giovanni Falcone, his wife and three of his bodyguards, by Cosa Nostra in the 1992 Capaci bomb attack.
"Thirty years have passed since that terrible May 23 when the history of our Republic seemed to stop, as if annihilated by pain and fear," Mattarella said during a commemoration ceremony in Palermo.
"The deafening silence after a boom, the likes of which had never been heard before, effectively portrays the disorientation the country when faced with that unprecedented attack".
The huge bomb attack on the A29 Trapani-Palermo highway also killed Falcone's wife Francesca Morvillo and three members of his security detail, Vito Schifani, Rocco Dicillo and Antonio Montinaro.
Falcone's friend and colleague Paolo Borsellino was killed two months later by another huge Cosa Nostra bomb.
Falcone led the investigation that culminated in the so-called Maxi Trial in which over 300 people were convicted, in the process proving that the Sicilian Mafia actually did exist, something that was not universally accepted at the time.
Falcone and Borsellino were killed in a bombing campaign launched by Cosa Nostra after the supreme court upheld the Maxi Trial convictions, making them definitive.
Mattarella admitted on Monday that many of Falcone's colleagues were among those who were hostile towards him.
"Falcone's cutting-edge, clearly prophetic vision was not always understood," Mattarella said.
"On the contrary, in some cases, it was opposed by attitudes that were widespread within the judiciary itself.
"Over time the judiciary has overcome its mistakes and been able to take on board and make the most of that vision". (ANSA).