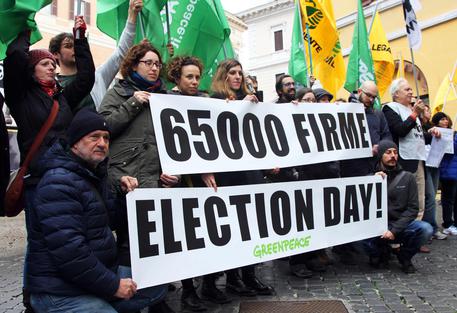 (ANSA) - ROME, MAR 31 - The first round of local elections as well as five referendums on the justice system will be held in Italy on a single 'election day', June 12, ministerial sources said Thursday.
The second round of the local elections across Italy will be two weeks later, on June 26.
The referendums include one on abolishing the so-called Severino law that stops people definitively convicted of several serious crimes, including corruption, from being able to stand in European, national and regional elections for six years.
This referendum was proposed by the League and Radicali parties.
Ex-premier Silvio Berlusconi was ejected from the Senate in 2013 and was banned from running in elections for several years under the Severino law after being convicted in a tax-fraud case.
Another referendum is about stopping prosecutors changing careers to become judges and vice-versa.
Another two referendums regard cases in which people can be detained on remand and the election of the members of the judiciary's self-governing body, the CSM.
The fifth referendum declared is on lawyers' voting to assess the performance of magistrates.
In the local elections, around 1,000 cites and towns will be called to the polls, including 26 provincial capitals, five of which are also regional capitals: Genoa in Liguria, L'Aquila in Abruzzo, Palermo in Sicily and Catanzaro in Calabria.
The provincial capitals are Alessandria, Asti, Barletta, Belluno, Catanzaro, Como, Cuneo, Frosinone, Genoa, Gorizia, L'Aquila, La Spezia, Lodi, Lucca, Messina, Monza, Oristano, Padua, Palermo, Parma, Piacenza, Pistoia, Rieti, Taranto, Verona and Viterbo.
Nine cities have more than 100,000 inhabitants: Genoa, Messina, Monza, Padua, Palermo, Parma, Piacenza, Taranto and Verona.
(ANSA).