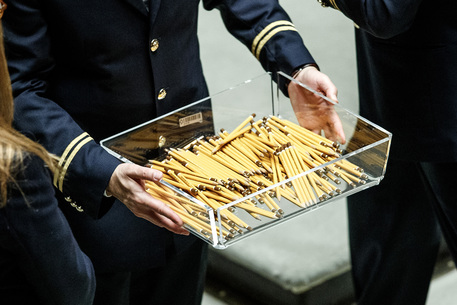 (ANSA) - ROME, JAN 27 - The fourth ballot of Italy's presidential election looks set be inconclusive on Thursday even though the number of grand electors needed to vote in a new head of State has dropped from two-thirds to a simple majority.
The magic number is now 505.
The first three ballots of the 1,009 grand electors - lawmakers from both houses of parliament and regional representatives - were inconclusive as the political parties have so far failed to agree on a successor to President Sergio Mattarella.
Indeed, the number of votes in favour of Mattarella being re-elected increased on Wednesday with respect to the first two ballots, climbing to 125.
Although the fourth ballot is likely to go the same way, the lower required majority may provide the impetus needed for the parties to reach an agreement.
The centre-left Democratic Party (PD), the 5-Star Movement (M5S) and the left-wing LeU group have told their grand electors to cast blank papers on Thursday, sources said.
The centre right is set to abstain, according to sources.
On Tuesday the parties of the centre right - Matteo Salvini's League, Silvio Berlusconi's Forza Italia (FI) and the opposition, right-wing Brothers of Italy (FdI) party - proposed three possible candidates: former education minister and ex-Milan mayor Letizia Moratti, former prosecutor Carlo Nordio and former Senate Speaker and philosopher Marcello Pera.
PD leader Enrico Letta politely said no to those names There was speculation that the centre right actually wanted to push for Senate Speaker Elisabetta Casellati to become Italy's first woman president.
The PD, however, reportedly convinced Salvini's group not to vote for a centre-right candidate, rather than seeking a consensus figure, on the grounds that this would rock the stability of the broad majority supporting Premier Mario Draghi's executive.
Salvini has called on the centre left to propose someone saying it was not up to him to come up with the name of a left-winger.
Some commentators have said the longer the parties fail to agree on a consensus figure, the more likely it is that Draghi will end up becoming head of State, even though many want him to stay on as premier.
Salvini said Thursday that Draghi is "previous where he is".
If the former ECB chief is elected head of State, it could lead to early elections. This is because many find it hard to imagine the broad spectrum of parties supporting his national unity executive agreeing to get behind another figure. There has been talk of Mattarella being re-elected, something that has only happened once, with his predecessor Giorgio Napolitano.
Under this hypothesis, Mattarella, 80, would stay on for a few more years, not another whole seven year-term, until after the end of the current parliamentary term and the next general election.
At that point, it might be easier for parliament to choose a successor, possibly Draghi.
"I don't think things will be wrapped up today," said ex-premier Matteo Renzi, the leader of the small, centrist IV party.
"I think they will be wrapped up tomorrow". (ANSA).