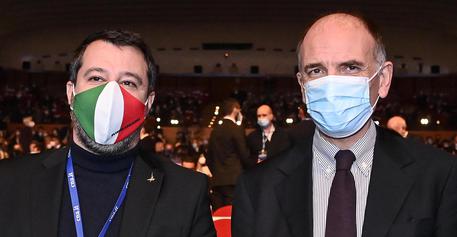 (ANSA) - ROME, JAN 24 - Sources for the rightwing League party and the centre-left Democratic Party (PD) said after a meeting on Italy's presidential election between leaders Matteo Salvini and Enrico Letta that a dialogue had been opened on a possible successor to President Sergio Mattarella who steps down February 3.
The two leaders will meet again Tuesday after their "long and cordial" encounter, the sources for both parties said.
"The two leaders are working on hypotheses," they said.
Most of the 1009 'grand electors' are expected to file blank ballots in the first three rounds of voting where a two thirds majority is needed, at least until Thursday's fourth round when a simple majority of 505 is required.
Premier Mario Draghi is the bookies' favourite to move from the premier's office to the presidential one though this may trigger early elections. (ANSA).