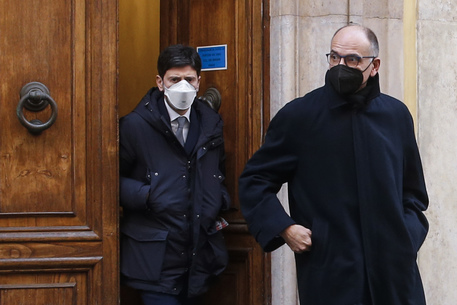 (ANSA) - ROME, JAN 19 - Democratic Party (PD) leader Enrico Letta said Wednesday that he was satisfied after talks with 5-Star Movement (M5S) chief Giuseppe Conte and Health Minister Roberto Speranza of the left-wing LeU group in view of the start of voting for Italy's new president next week.
He added, however, that the meeting had not produced a joint candidate from the three groups for the successor to President Sergio Mattarella, whose seven-year term is coming to an end.
"There is no agreement on the names because we'll talk about that with the centre right in the coming days," Letta said.
"It was an excellent meeting with Giuseppe Conte and Roberto Speranza.
"We will work together to give the country an authoritative female or male president who everyone can identify with.
"We are open to discussion. No one has the right of first refusal.
"We all are duty bound to be responsible".
The parties of the centre right had said they were in favour of ex-premier and Forza Italia leader Silvio Berlusconi becoming the next head of State.
But Berlusconi's hopes of becoming president look to be diminishing, amid big doubts about whether the media billionaire would be able to muster the necessary support when lawmakers from both houses of parliament and regional representatives start voting for a new president from Monday onwards.
The PD and the M5S have said the new head of State must be a more impartial figure than Berlusconi.
"The meeting went well," Conte.said of the encounter with Letta and Speranza.
"We are ready for strong action and broad debate.
"Obviously partisan candidates like that of Berlusconi will be taken off the table".
A majority of two-thirds of the 'grand electors' is needed to vote in a new president in the first three ballots, after which a simple majority is sufficient.
Premier Mario Draghi is among the favourites to be the nation's next president, although if the former ECB chief is elected head of State, it could lead to early elections.
This is because many find it hard to imagine the broad spectrum of parties supporting his national unity executive agreeing to get behind another figure.
M5S sources said Wednesday that the movement was working to find an alternative name that would be widely accepted so Draghi would stay on as premier. (ANSA).