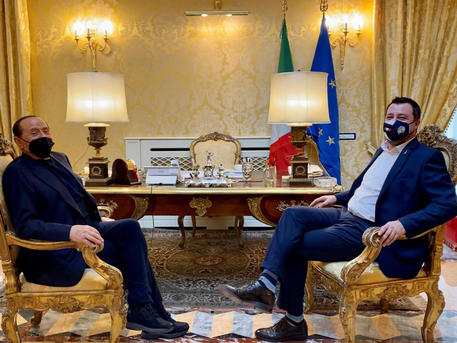 (ANSA) - ROME, JAN 17 - League leader Matteo Salvini said Monday that it will be necessary to verify whether ex-premier Silvio Berlusconi has the necessary support to become Italy's next president before lawmakers from both houses of parliament and regional representatives start voting for a new head of State on January 24.
Salvini and Giorgio Meloni, the leader of the right-wing Brothers of Italy party (FdI) party, have said they are in favour of the Forza Italia leader and media billionaire succeeding President Sergio Mattarella, whose seven-year term is coming to an end.
But Berlusconi has not confirmed he will stand amid doubts whether he has enough votes among the 'grand electors'.
The centre-left Democratic Party (PD) and the 5-Star Movement (M5S) have said they will not vote for Berlusconi to be president, saying the head of State should be a more impartial figure.
"It is necessary to verify if Berlusconi has the numbers before the start of voting next week," Salvini said.
"When the voting starts, the League, as a responsible party of government, now and in the coming years, will make a proposal that I think can be convincing for many people, if not everyone".
A majority of two-thirds of the 'grand electors' is needed to vote in a new president in the first three ballots, after which a simple majority is sufficient. (ANSA).