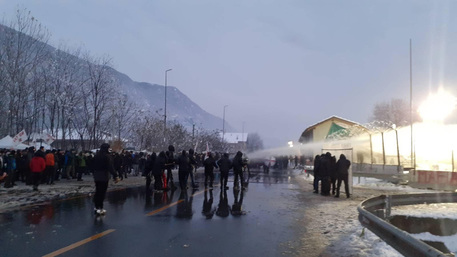 (ANSA) - ROME, DEC 9 - A Carabiniere officer was injured Tuesday night in fresh protests in the Val di Susa north of Turin against the high-speed rail (TAV) line being built between Lyon and Turin.
So-called 'No TAV' protesters hurled rocks, large firecrackers and flares at police manning the barricades around a building site where a new 'autoport' is being built.
Local mayors went on to stage a peaceful protest against the TAV on Wednedday afternoon.
The clashes took place at San Didero as work got under way for a new lorry park linked to the A32 Turin-Bardonecchia motorway.
The police responded with tear gas and water cannon and the clashes lasted a couple of hours.
Protestors in the Susa Valley have staged a long and sometimes violent battle to try to stop the Lyon-Turin high-speed rail due to its impact on the environment. (ANSA).