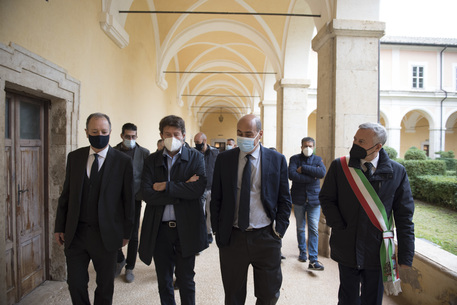 (ANSA) - ROME, NOV 8 - A 13th century monastery south of Rome where ex-Trump aide Steve Bannon had planned to set up an international school for populist nationalists reopened to the Italian public after a restoration on Monday.
The Certosa di Trisulti, a former Carthusian monastery or charterhouse near Frosinone, was consecrated in 1211, becoming a national monument in 1873.
Last March an Italian court ruled to eject Bannon's would-be nationalists' think tank from the abbey The Council of State, Italy's highest administrative court, upheld a regional motion to evict Bannon's Dignitatis Humanae Institute from the medieval Trisulti Charterhouse.
At the reopening on Monday, Lazio Governor Nicola Zingaretti said "it was very important to get the 'sovereigntist' school out of the abbey".
He called the charterhouse "a European marvel in our territory".
Culture Minister Dario Franceschini said the restoration and reopening were "a beautiful Italian story of redemption".
(ANSA).