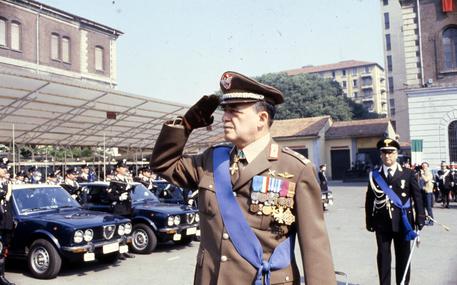 (ANSA) - ROME, SEP 3 - The assassination by Cosa Nostra of Carabinieri General and Palermo Prefect Carlo Alberto Dalla Chiesa ushered in a "quality leap" in the fight against the Sicilian Mafia which has reaped major successes, President Sergio Mattarella said ahead of Saturday's 39th anniversary of the killing.
On 1 May 1982, Dalla Chiesa, who had won acclaim in fighting the Red Brigades domestic terrorists, was appointed as prefect for Palermo to stop the violence of the Second Mafia War. He was murdered in Palermo on 3 September 1982, on the orders of bloody late Mafia boss Salvatore 'the Beast' Riina.
He and his second wife Emanuela Setti Carraro were in an Autobianchi A112 driven by her, when a number of gunmen on motorbikes and a car forced the car off the road where it crashed into a stationary vehicle.
The gunmen opened fire and Dalla Chiesa was killed along with his wife and their escort agent, Domenico Russo.
Mattarella said "their barbaric murder was one of the gravest moments in the attack on institutions by organized crime but, at the same time, it ended up accentuating still more an unbridgeable gap between the wounded city and the Mafia that continued to want to decide its destiny with intimidation and death".
Mattarella said "the national community in its entirety, albeit struck and shaken, succeeded in reacting to that hateful challenge by strengthening itself with the same determined and lucid energy which Carlo Alberto Dalla Chiesa had already showed in his work against criminal and terrorist organizations, during his brilliant career in the Carabinieri.
"Despite the brevity of his work in Palermo, the sacrifice of Prefect Dalla Chiesa and his ideal heritage helped direct many of the choices that, in the subsequent years, enabled a quality leap in the action of fighting phenomena of mafia infiltration of the economy and the public administration.
"More incisive norms and powers of coordination gave fresh vigour to the strategies of combatting organized crime and strengthened the confidence of the public apparatus that was fighting it; while, in civil society, there grew a feeling og active citizenship, harbinger of a culture of rights counterposed to the logic of belonging and privilege.
"In recalling that extreme sacrifice, I renew to the Dalla Chiesa, Setti Carraro and Russo families my feelings of closeness and participation, on mt part and that of the whole country," said Mattarella, who lost his elder brother Piersanti, the Sicilian regional council chair, to the Mafia in January 1980.
Senate Speaker Elisabetta Casellati said Dalla Chiesa was "a symbol of the fight against the Mafia".
House Speaker Roberto Fico said "the Mafia feared his courage, and this patrimony must be closely guarded".
Maria Falcone, sister of Giovanni Falcone, a Mafia prosecutor assassinated in 1992, said Dalla Chiesa's death had "not been in vain".
The murder of Falcone and, two months later, of his friend and colleague Paolo Borsellino, spurred a reaction by the Italian State which has curbed the power of the Sicilian Mob, with a string of bosses including the late Riina and the late Bernardo Provenzano being arrested over the years.
Trapani superboss Matteo Messina Denaro is one of the few major figures still at large. (ANSA).