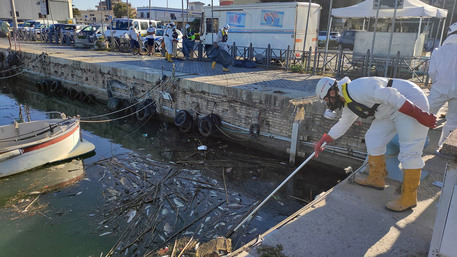 (ANSA) - ROME, SEP 1 - The Italian Green party on Wednesday blamed Rome Mayor Virginia Raggi for a mass die-off of fish in the River Tiber this week.
Europa Verde (Green Europe) leader Angelo Bonelli said Raggi's administration had been "passing the buck" on the incident.
He said a large quantity of dead fish were visible at the iconic Castel Sant'Angelo.
Bonelli also recalled that a similar die-off had occurred in May last year.
He said the phenomena were "probably of a chemical origin, given the numerous illegal discharges that persist in the Tiber and its tributary the Aniene." Bonelli said the plans to make the Tiber water potable, by municipal water company ACEA; were "crazy".
Environmental agency ARPA has classified the Tiber waters at its lowest possible drinkability level, A3, Bonelli recalled.
Despite this, Raggi's administration set up a first plant to make water drinkable for 350,000 Romans in 2018 and is pressing ahead with plans to install a second plant, five times bigger, for 2.1 million inhabitants, Bonelli said. (ANSA).