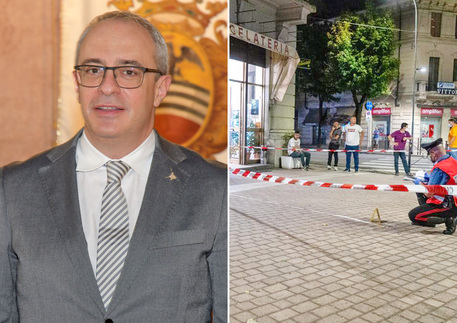 (ANSA) - PAVIA, JUL 21 - A row ensued Wednesday after a public safety and security councillor for the rightwing ant-migrant League party in the northern city of Voghera, Massimo Adriatici, was arrested on suspicion of shooting and killing an illegal Moroccan immigrant after an argument outside a bar on Tuesday night.
Adriatici, a lawyer and local anti-street violence campaigner, allegedly fired at the 39-year-old immigrant in self-defence, said the League, which has successfully campaigned for laxer self-defence laws in Italy.
Adriatici said the fatal shot went off accidentally after he was pushed to the ground by the victim.
But police said he shot and hit the immigrant near the heart after he was pushed by him, according to judicial sources.
Police ruled out the veracity of a report from several bar clients that a man saw the immigrant throw a bottle at the official.
The immigrant may, however, have thrown a bottle previously while he was bothering, as he often did, people outside the bar in Piazza Meardi, police said.
The immigrant was unarmed during the confrontation with Adriatici, police said.
The League previously had said he was defending a girl from alleged molestation by the immigrant, who they said had a history of being drunk and disorderly as well as violent.
League leader Matteo Salvini said "far from being the Wild West in Voghera, the hypothesis of legitimate self-defence is becoming clearer." The former anti-migrant interior minister and deputy premier said "we'll wait for the reconstruction of events, there are no citizens that go around shooting people with their legitimately held weapons, but self-defence is obviously always legitimate in the case of being attacked, as a last resort".
Adriatici is a prominent lawyer in the town near Pavia in Lombardy and has started initiatives against riotous and drink and drug fuelled street night life known as the 'malamovida'.
An anti-alcohol ordinance he promoted came into force Tuesday night, local sources said.
He has also gained prominence by serving urban DASPO bans on homeless and beggars.
A former policeman, he teaches criminal law to police cadets at Alessandria and also works at his alma mater, the University of Eastern Piedmont.
Adriatici started his career in the police force as an officer in 1995 and ended it in 2011, after previously earning a law degree, as a superintendent. He served his entire time in Voghera.
He was elected for the League in October 2020.
He has now suspended himself from his post, Voghera Mayor Paola Garlaschelli said.
In a recent interview Adriatici said "the use of a weapon must be justified by a real danger. Firing must be a last resort".
The victim, Youns El Boussetaoui, had a long criminal record for threats, resisting arrest, drug pushing, escaping detention, drunk driving without a license, fraud and illegal weapons possession, judicial sources said.
Judicial sources said Adriatici was under investigation for suspected culpable excessive self defence.
The League recently ushered in a new law on legitimate self-defence which is broadly similar to the US 'stand your ground' norms.
In political reactions to Tuesday night's incident, the anti-establishment 5-Star Movement (M5S) said "it is unacceptable that an unarmed man can lose his life due to a shot fired in a public square, as if we were in the Wild West".
Communist Refoundation said "we had known for a long time that individuals of dubious morality were elected in the ranks of the League, but what happened at Voghera is really too much", calling on the anti-migrant party to "face up to the crime" and saying they could not rule out a "racist" component in the incident.
The Democratic Party (PD) said "what happened in Voghera is a huge event, which must spur everyone, and first of all the League, to reflect" on alleged vigilante justice.
"Everyone, bar none, must condemn the Wild West logic and DIY justice," it said.
"The culture of hate degenerates things", it added.
The Green Europe party said "Salvini's statements in defence of (Adriatici) are extremely serious. Salvini who, with the investigation still ongoing, anticipates the reconstruction of the events and rushes to say that the gunshot fired accidentally is to be considered legitimate defence, is only defending a Wild West situation".
The bar owner, Robino Punturiero, said "I don't justify in any way what happened but this person (El Boussetaoui) is absolutely not a victim, we have been the victims for some time".
He said "I have known Massimo Adriatici for a very long time, he is a great bloke, calm, I can't say anything (against him), he has always helped us and he used to get the Carabinieri to patrol around here". (ANSA).