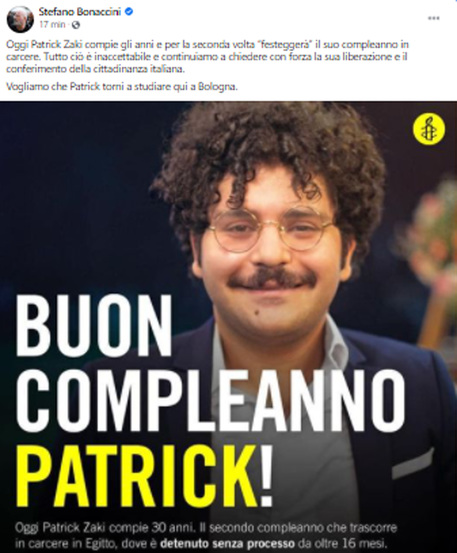 (ANSA) - ROME, JUN 16 - Italian politicians called for the government to give an Egyptian Bologna university researcher Italian citizenship as he marked his 30th birthday in detention in Cairo on sedition charges Wednesday.
"Today Patrick Zaki turns 30. In a cell. We ask the government to apply the unanimous indication of parliament and give him citizenship," said Enrico Letta, a former premier and leader of the centre-left Democratic Party (PD).
The PD's Emilia-Romagna governor, Stefano Bonaccini, said "today Patrick Zaki marks his birthday and for the second time will 'celebrate' it in prison. All this is unacceptable and we will continue to strongly call for his release and the conferral of Italian citizenship.
"We want Patrick to come back and study here in Bologna".
Foreign Affairs Undersecretary Benedetto Della Vedova told Rainews24 recently that the government will shortly start to "verify the conditions for the granting of Italian citizenship" to Zaki.
Zaki is an Egyptian Bologna University postgraduate student who has been held in Egypt since February 7 last year on charges of "disseminating false news" and "incitement to protest".
The Senate has approved a motion calling on the government to grant him Italian citizenship.
Della Vedova likened Zaki's case to the "tragic affair" of 28-year-old Italian student Giulio Regeni, who was tortured to death in Cairo in early 2016.
"The parliamentary motion gives a commitment to the government, which came out in favour of the motion itself," he said.
Zaki, a 29-year-old Coptic Christian, is pursuing an Erasmus Mundus Master's Degree in Women and Gender Studies at the University of Bologna.
He also conducts research and advocacy on gender issues and human rights for the Egyptian Initiative for Personal Rights (EIPR), a human rights organization based in Cairo.
Petitions for his release have been rejected on countless occasion.
Zaki was arrested on arriving at Cairo International Airport when he returned home from Bologna for a short family visit.
The Egyptian National Security Agency reportedly arrested Zaki, interrogated him about his time in Italy and his human rights work, and took him to an undisclosed location.
During interrogation, he was allegedly frequently threatened, beaten on his stomach and back and tortured with electric shocks.
The European Parliament, Amnesty International and Scholars At Risk have been among the bodies calling for his release, along with the Italian government. (ANSA).