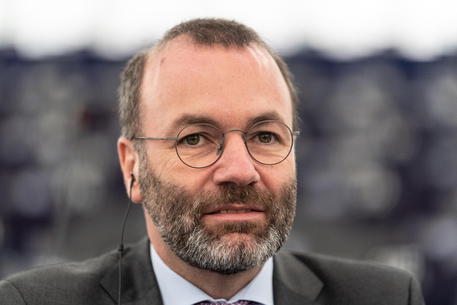 (ANSA) - BRUSSELS, APR 9 - Premier Mario Draghi was right to call Turkish President Recep Tayyip Erdogan a dictator in the so-called 'sofagate' case, European People's Party (EPP) chief Manfred Weber said Friday.
"Prime Minister Draghi is right, under President Erdogan's lead Turkey has moved away from the rule of law, democracy and fundamental freedoms in the last decade," Weber said in a statement sent to Italian media.
Turkey, Weber said, "is not a free country for all its citizens.
"If Europe wants to build a constrcutive partnership with countries like Turkey, and it is in our strategic interest to do so, we ought to speak clearly and honestly about the actual facts.
"This is also the reason why we have been asking the (EU) Council for years to finally close the procedure of enlargement of the EU to (include) Turkey. We are categorically against a prospect of accession of Turkey to the EU and as long as it is on the table it hinders a franker and more realistic relationships with the country".
Turkey recently pulled out of the 2011 Istanbul Convention on violence against women, dismaying activists who say gender violence is on the rise there.
Draghi angered Ankara by calling Erdogan a dictator in a press conference on Thursday.
The Turkish government rapidly summoned the Italian ambassador to Ankara to express its disapproval of the comments, which Draghi made in relation to the 'sofagate' case regarding the failure to provide a seat for European Commission President Ursula von der Leyen during a meeting on Tuesday.
"I am really sorry about the humiliation that the commission president had to suffer with these, let's call them for what they are, dictators," Draghi said.
The Italian premier said the EU had to be frank with figures like Erdogan, stressing the differences in outlook while at the same time being ready to cooperate.
Turkish Foreign Minister Mevlut Cavusoglu called the comments "ugly and unreasonable" and said they should be taken back.
(ANSA).