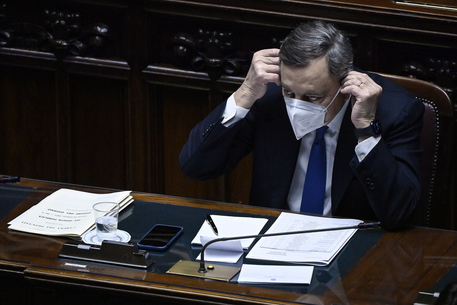 (ANSA) - ROME, FEB 18 - Premier Mario Draghi's new government faces a confidence vote in the Lower House on Thursday after registering a big win in the Senate on Wednesday.
The executive, which is backed by almost all the parties in parliament, won the the confidence vote in the Upper House by 262 votes in favour and 40 against.
The right-wing Brothers of Italy (FdI) party is the only major group opposing the administration led by the former head of the European Central Bank (ECB).
But 15 Senators belonging to the 5-Star Movement (M5S) broke ranks and voted against the government while eight others failed to turn up for the vote.
President Sergio Mattarella turned to Draghi to form a new government to prevent Italy having to have early elections in the middle of the COVID-19 pandemic after the collapse of ex-premier Giuseppe Conte's executive.
The premier said "unity is a duty, not an optional" on Wednesday and stressed that his government would fight the pandemic "with all means" - an echo of his famous line on doing "whatever it takes" to save the euro when he was at the helm of the ECB.
He said Italy needed a "new Reconstruction" like the one it embarked on after World War II.
Draghi also said the euro as "irreversible".
Earlier in the week League leader Matteo Salvini, who supports the new government, had said only death was irreversible.
(ANSA).