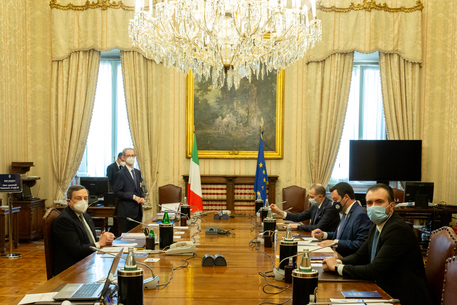 (ANSA) - ROME, FEB 9 - League leader Matteo Salvini said Tuesday that he told Premier-designate Mario Draghi that he wants a government headed by the former chief of the European Central Bank to take the lead in Europe.
"We talked about Europe," Salvini said after government-formation consultations.
"Our aim is for Italy to be a lead player in Europe again.
"What we are interested in is that it works for the national interest at the EU level.
"No austerity. No blood-and-tears pacts".
Salvini said he did not talk to Draghi about who the ministers will be in his government.
But he said he was satisfied that the premier-designate had agreed with the League's idea of using the model of streamlined bureaucracy employed in rebuilding Genoa's viaduct after the collapse of the Morandi bridge in 2018. (ANSA).