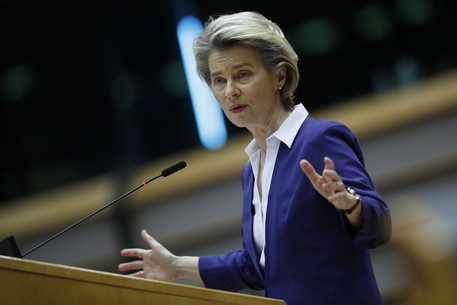 (ANSA) - BRUSSELS, JAN 20 - Stability is needed during the COVID crisis, European Commission President Ursula von der Leyen said Wednesday after being asked to comment on the Italian government's winning a confidence vote but without an absolute majority after the defection of a small party Tuesday night.
"I want to reiterate that we are in the middle of a crisis, we need stability, everyone must work to the maximum to overcome the pandemic and he economic crisis," she said.
"The Commission has been in close contact with the Italian government, for months, for the national Recovery Plan, it is a work in progress, all these plans are going forward to make sure that the priorities are met".
After the defection of ex-premier Matteo Renzi's Italia Viva party left him without a Senate majority, Premier Giuseppe Conte got a relative majority in the upper house in Tuesday night's confidence vote.
He has said he hopes to secure more votes to regain a solid majority as President Sergio Mattarella, the arbiter of the government crisis, has reportedly requested.
If Conte fails in that bid, Italy may be plunged into an election campaign at the height of a pandemic that has claimed over 83,000 lives.
The centre-right opposition would win a general election if it were held now according to all opinion polls. (ANSA).