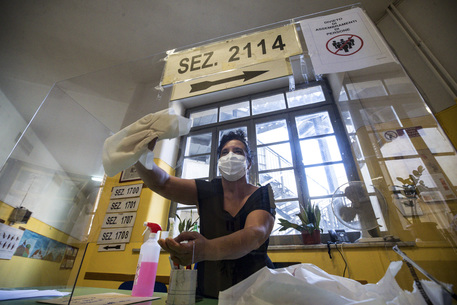 (ANSA) - ROME, SEP 21 - The Italian public is set to approve a cut in the number of parliamentarians, according to a projection released after the vote count for the Constitutional referendum started on Monday.
The Opinio projection for State broadcaster RAI put the yes vote on 67.8% compared to 32.2% for the no vote.
People voted on whether to approve a law that amends the Italian Constitution to reduce the number of MPs in parliament, from 630 to 400 in the Chamber of Deputies and from 315 to 200 in the Senate.
Regional elections were also held in Veneto, Campania, Tuscany, Liguria, Marche, Puglia and Valle d'Aosta.
Opinio exit polls put the centre-right candidates ahead in Veneto, Liguria and Marche, and the centre-left candidates in front in Campania and Tuscany.
The contest in Puglia was even, according to the polls.
Specifically, centre-right incumbent governors Luca Zaia and Giovani Toti were on 72-76% and 51-55% respectively in Veneto and Liguria.
In Marche, the centre right's Francesco Acquaroli was on 47-51%, compared to 34-38% for the centre left's Maurizio Mangialardi and 7-9% for Gian Mario Mercorelli of the 5-Star Movement (M5S).
In Campania the exit poll put centre-left Governor Vincenzo De Luca on 54-58%., with the centre right's Stefano Caldoro on 23-27%.
Things looked tighter in Tuscany, with the centre-left's Eugenio Giani on 43.5-47.5% compared to 40-44% for the centre-right's Susanna Ceccardi.
The poll sees a head-to-head in Puglia between Governor Michele Emiliano (centre left) and former governor Raffaele Fitto (centre right) , who are both on 39-43%. (ANSA).