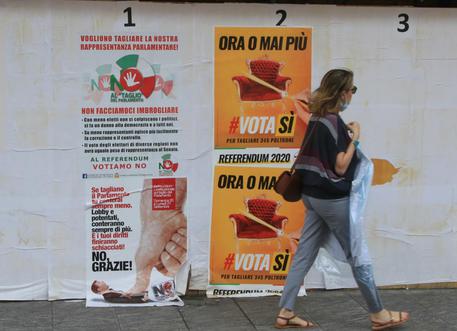 (ANSA) - ROME, SEP 18 - On Sunday and Monday Italians will vote in a referendum on whether to approve a constitutional law that amends the Italian Constitution to reduce the number of MPs in parliament, from 630 to 400 in the Chamber of Deputies and from 315 to 200 in the Senate.
Elections are also taking place in seven regions - Veneto, Campania, Tuscany, Liguria, Marche, Puglia and Valle d'Aosta.
The referendum was initially scheduled to be held on 29 March but had to be postponed because of the COVID-19 pandemic.
Most of Italy's political parties have come out in favour of a yes vote.
But the 5-Star Movement, the biggest party supporting Premier Giuseppe Conte's government, has pushed hardest for this reform.
So it has the most to lose if it is rejected by voters.
"I'll vote in Rome and I've already said I'll vote yes in the referendum," said Conte.
"I don't see the cut to the number of parliamentarians as a reduction in representation.
"It can be the first step towards valorizing the work of parliament, including in terms of authoritativeness.".
Foreign Minister Luigi Di Maio, an M5S bigwig, stressed that Conte and most of the party leaders have said they will vote in favour.
"The yes vote is uniting Italian voters," he said.
"The yes vote is uniting political parties and I think this is a great sign of Italy's maturity.
"I think we will make a first step for reform. It is not change for change's sake".
Life Senator and Holocaust survivor Liliana Segre, however, has said she will vote against cutting the number of members of the Italian parliament.
"There are good reasons both for the yes vote and the no vote," Segre told La Repubblica.
"I am inclined to vote no, above all out of coherence with my general attitude towards parliament.
"I entered like you do when you go into a temple because parliament is the highest expression of democracy.
"So hearing this institution, which is part of my civil religion, talked about as if it were all a question of costs and positions, is not something that is part of me".
The regional elections, meanwhile, could end up putting Conte's national government under pressure if the centre-right opposition led by Matteo Salvini's League party is triumphant.
Municipal elections will take place in 1,149 comuni across Italy too.
Some 18 provincial capitals will go to the polls: Agrigento, Andria, Aosta, Arezzo, Bolzano, Chieti, Crotone, Enna, Fermo, Lecco, Macerata, Mantua, Matera, Nuoro, Reggio Calabria, Trani, Trento and Venice. Three of these are also regional capitals: Aosta, Trento and Venice. (ANSA).