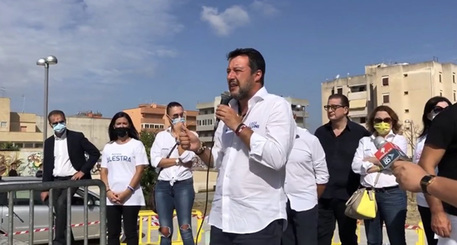 (ANSA) - PONTASSIEVE, SEP 9 - A 20-year-old woman from Congo on Wednesday pushed and shoved rightwing League leader Matteo Salvini, ripping his shirt and breaking off the gold chain around his neck, as he arrived for an election rally at Pontassieve near Florence.
The young woman was in "a clear state of psycho-physical excitation", police said.
They said her actions did not appear to have been premeditated.
They said she found herself alongside Salvini as she was returning from work.
Separately, a group of young leftists and anarchists protested Salvini's visit.
The woman was part of a crowd that had gathered for the League leader's arrival.
The League is a populist and nationalist anti-migrant and Euroskeptic party.
Tuscany is one of seven Italian regions going to the polls to elect new governors and a new government on September 20-21.
Elections will also take place in Val d'Aosta, Campania, Liguria, Marche, Puglia and Veneto.
Elections will also be held in 1,137 out of 7,904 Italian municipalities, including 18 provincial capitals.
They are: Agrigento, Andria, Aosta, Arezzo, Bolzano, Chieti, Crotone, Enna, Fermo, Lecco, Macerata, Mantua, Matera, Nuoro, Reggio Calabria, Trani, Trento and Venice.
Three of these are also regional capitals: Aosta, Trento and Venice.
In a referendum over the same two days, Italians will be asked whether they approve a law that amends the Italian Constitution to reduce the number of MPs in parliament, from 630 to 400 in the Chamber of Deputies and from 315 to 200 in the Senate.
Parties are divided on the reduction in MPs, which will bring their numbers down from 945 to 600.
Some, like government partners the 5-Star Movement and the Democratic Party, see it as a necessary streamlining and cost-cutting of politics.
Others say democratic representation is at risk. (ANSA).