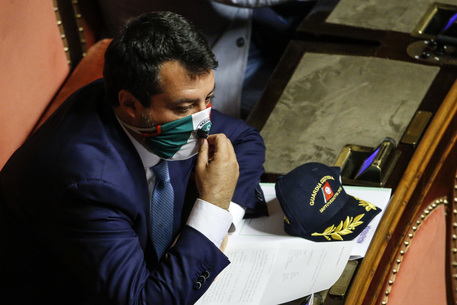 (ANSA) - ROME, 31 LUG - League leader Matteo Salvini said Friday that he was the victim of an injustice after the Senate on Thursday voted to authorise putting him on trial in relation to the Open Arms case.
Salvini is accused of allegedly effectively 'kidnapping' migrants on the Open Arms rescue ship with the decisions he made when he was interior minister last year.
"I woke up the same way as I went to bed last night - tranquil and a little angry after suffering a senseless injustice," he said.
The case is one of several stemming from Salvini's former closed ports policy against NGO-run migrant rescue ships during his 14-month stint as interior minister.
The Open Arms spent almost three weeks at sea last year after Salvini refused to give the OK for it to dock when he was a minister in Premier Giuseppe Conte's first government.
Salvini reiterated his assertion that Conte was in agreement with his handling of the case .
Salvini pulled down the first Conte government last year, a move that led to the creation of a new executive under the same premier but backed by a different coalition. (ANSA).