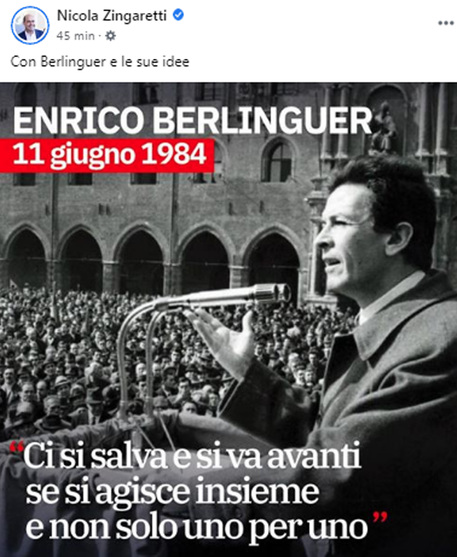 (ANSAmed) - ROMA, 09 LUG - Nationalist opposition League leader Matteo Salvini on Thursday said the League had taken up the mantle of late and much-loved Italian Communist Party (PCI) leader Enrico Berlinguer.
"The League has taken up the values of a certain Left, of Berlinguer, on labour, artisans and other issues"; he said ahead of the opening of the League's new HQ in Rome opposite the PCI's once-glorious and conic seat in Via delle Botteghe Oscure.
The PCI's heir, the centre-left democratic Party (PD), was indignant at the comparison with one of Italy's historic leftist leaders.
PD Senate Whip Andrea Marcucci said "I was never a PCI militant but thinking of Salvini comparing the League to Berlinguer's party makes me indignant".
PD bigwig Emanuele Fiano voiced "horror and pity" over the comparison with Berlinguer, a so-called Euro-Communist whose 1984 funeral was attended by over a million people.
Nicola Fratoianni of the PD's small coalition partner Free and Equal (LeU) said "the heat has gone to Matteo Salvini's head.
Comparing himself to Berlinguer and likening the League, a xenophobic party stuffed with ex fascists and turncoats, to the PCI, is simply ridiculous". (ANSAmed).