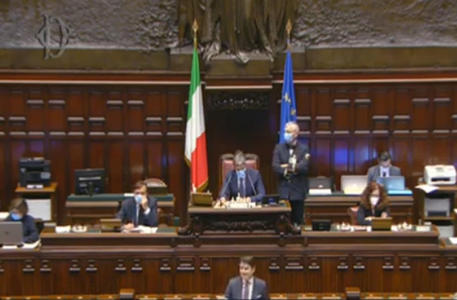 (ANSA) - Rome, June 10 - Premier Giuseppe Conte has been meeting ministers one at a time in view of Friday's estates-general on the COVID economic recovery plan involving employers, unions and the opposition, sources said. The ministerial meetings were 'bilaterals', sources said, amid reports of tension within the government about how to move forward.
The estates general summit at Rome's Villa Pamphili is aimed at forging a coherent and well-funded plan for Italy's economic recovery from the coronavirus crisis. Foreign Minister Luigi Di Maio said Tuesday that the government is in good health. Di Maio, a bigwig and former leader of the ruling anti-establishment 5-Star Movement (M5S), was speaking after the leader of the M5S's main government partner, Nicola Zingaretti of the centre-left Democratic Party (PD), called for a "turning point" from the executive led by Premier Giuseppe Conte. Di Maio told a Corriere della Sera forum on Made in Italy that "debate is legitimate, as long as it stays within positions taken by political forces but always reaches a common result.
"In no country in the world is there talk of pulling down the government and making another one," he said after nationalist opposition League party leader Matteo Salvini urged the M5S and the PD to pull the plug on the administration, as he had done on the last M5S-League one in August, and call early elections in October. "The government is enjoying good health and is facing this economic and health crisis in the best possible way," Di Maio said. "That does not mean perfectly, but in the best way possible". Zingaretti said "I think that the results obtained by the government are an element of strength but we must not be lazy.
"Now we must tackle jobs, security and the reopening of schools. We mustn't rest on our laurels. We must be rigorous. My appeal is to be concrete, useful and far-sighted. Which is not to end an experience but on the other hand go forward in the country's interests." The PD leader said the government must now "attack" crucial issues while listening to the opposition.